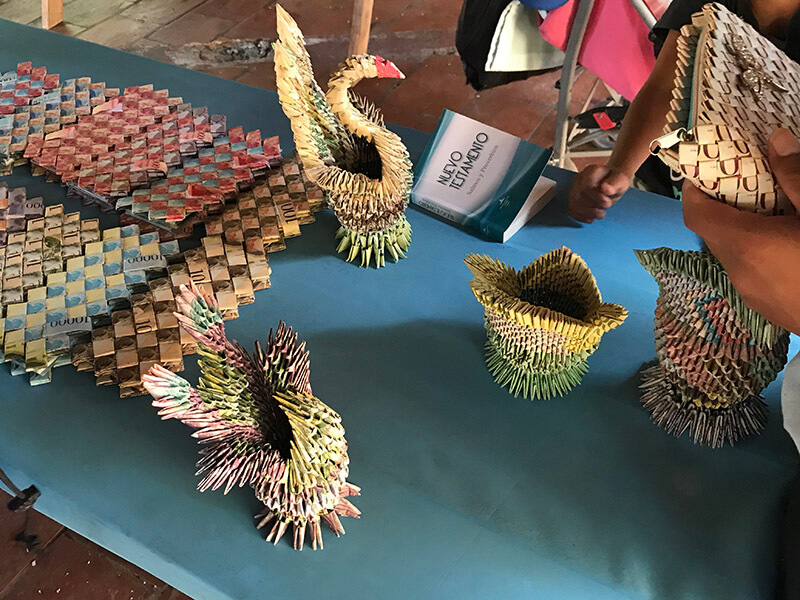 “Lay up for yourselves treasures in heaven”

A grocery shopper stands crying in a store aisle. She has stood for hours waiting to get into this store. She needs supplies for her family, but the shelves are basically empty.

A man at a drug store lays his merchandise on the counter. A bottle of shaving crème, a razor, and a stick of deodorant. Ignoring the shuttered credit card machine and cash register, he carefully counts tiny chips of gold from a folded napkin into the digital scale on the counter.

A haggard-looking mother at a pharmacy begs the cashier to sell her a vial of insulin for her diabetic son, tearfully waving a fistful of large denomination bills. The cashier shakes his head. It’s not enough money and besides, there is no insulin available.

A father roots desperately through piles of garbage on the curb looking for something, anything edible, to take home to his ten-month-old baby. Nearby a street artisan weaves a beautiful handbag out of 800 pieces of large denomination banknotes.

The money is worthless. Welcome to Venezuela.

It wasn’t always this way. Venezuela used to be the wealthiest country in South America, with the highest standard of living. It has abundant natural resources and the highest proven oil reserves of any country in the world. Yes, even more than Saudi Arabia. It has gold, minerals, and fertile land, but its people are starving.

What if you lived in Venezuela before the crash? What if you had substantial holdings of Venezuela bolivars while they were still valuable?

But you knew the crash was coming. Thankfully, you had a friend. An utterly reliable friend who offered to borrow your money and pay it back to you in gold after the crash. Your money would be safe. Wouldn’t that be a deal?

That is the deal we are offered. The crash is coming. Someday, these American or Canadian dollars will be worthless. But we have inside knowledge. We have a perfectly reliable super-investor who offers a secure deal. Loan him our money now and it will be safe though any circumstance no matter what.

God has made us that offer. It is sound. It is absolutely safe. He has warned us that the crash is coming. He told us in His foreknowledge that this world is not a safe place for our valuables. “Lay not up for yourselves treasures upon earth, where moth and rust doth corrupt, and where thieves break through and steal.” Matthew 6:19

He gives us a safe alternative. “But lay up for yourselves treasures in heaven, where neither moth nor rust doth corrupt, and where thieves do not break through nor steal.” Matthew 6:20

He tells us how to make Him the loan. “He that hath pity upon the poor lendeth unto the LORD; and that which he hath given will he pay him again.” Proverbs 19:17.