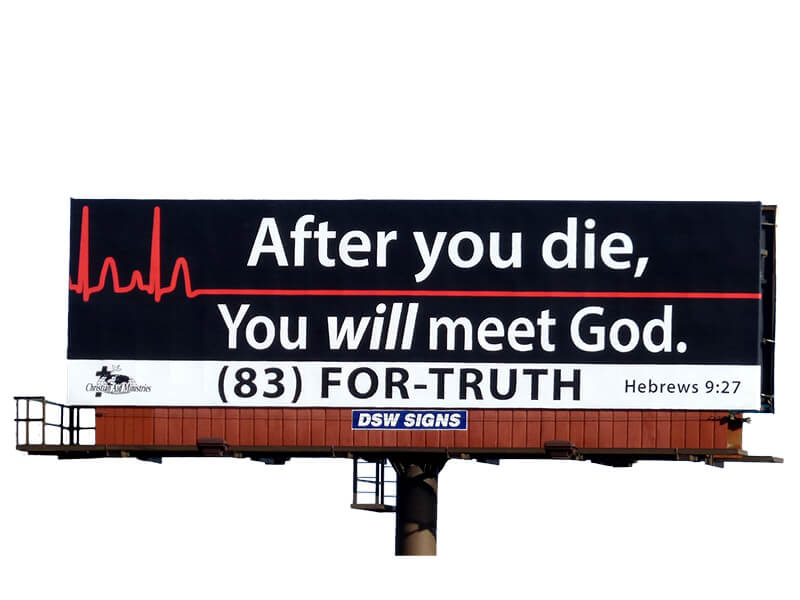 The fear of death

Our message After you die, you will meet God has been our second highest call-generating billboard. It raises a fearful question in the hearts of America’s motorists—will I actually meet God?

People are afraid of death. This fear of death is a result of sin and a deep-down awareness of God’s displeasure with sin. Fear of death is a type of bondage. Hebrews 2:14-15 says, “Forasmuch then as the children are partakers of flesh and blood, he also himself likewise took part of the same, that through death he might destroy him that had the power of death, that is, the devil; And deliver them who through fear of death were all their lifetime subject to bondage.” The fear of what may come after death keeps many people in miserable bondage all their lives. One celebrity quipped, “It’s not that I’m afraid to die. I just don’t want to be there when it happens.”

People try to avoid thinking about death, but the death rate is 100 percent. Ten out of ten people die. The average worldwide death rate in 2020 was about 160,000 deaths per day. Most weren’t ready for death or did not realize they were about to die. Many who died probably had plans for things to accomplish that day or that week. It doesn’t matter how much money we have or how health-conscious we may be; people of all ages and social backgrounds die.

What is death? We think of death as when breathing, brain activity, and the heart all stop, but the Bible describes death as “wages.” Romans 6:23a says, “For the wages of sin is death.” Death is the penalty for sin. We earn death. Physical and spiritual death came into the world because of Adam’s sin. “Wherefore, as by one man sin entered into the world, and death by sin; and so death passed upon all men, for that all have sinned” (Romans 5:12).

According to James 2:26, “the body without the spirit is dead.” Each person is made up of body, soul, and spirit. The soul and spirit are easily separated from the body. Ecclesiastes 12:7 explains, “Then shall the dust return to the earth as it was: and the spirit shall return unto God who gave it” and verse 5 of the same chapter declares, “man goeth to his long home.”

Our Lord has destroyed the power of death, which provides us opportunity for eternal life. Christians have victory over death through faith in Jesus Christ. “The gift of God is eternal life through Jesus Christ our Lord” (Romans 6:23b).

1 Corinthians 15:51-57: “Behold, I shew you a mystery; We shall not all sleep, but we shall all be changed, in a moment, in the twinkling of an eye, at the last trump: for the trumpet shall sound, and the dead shall be raised incorruptible, and we shall be changed . . . So when this corruptible shall have put on incorruption, and this mortal shall have put on immortality, then shall be brought to pass the saying that is written, Death is swallowed up in victory. O death, where is thy sting? O grave, where is thy victory? The sting of death is sin; and the strength of sin is the law. But thanks be to God, which giveth us the victory through our Lord Jesus Christ.”

Praise the Lord! Death will be vanquished by the resurrection!

To help support the Billboard Evangelism Program, please click below to give a one-time gift.