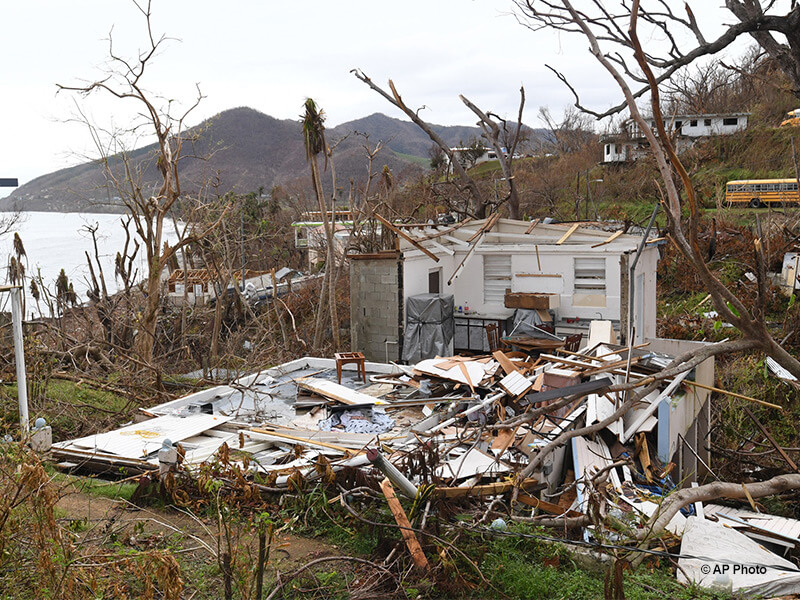 Most of the island of 3.4 million people is still without power or phone communication. In areas hit with heavy flooding, water still stands in houses. Many are trapped by mudslides and flooding, unable to get food and clean water. Those able to get to a store may wait in line all day for food.

In the interior of the island, the storm ripped off the tin roofs of over half of the houses. Many of the homes are cement, but those with wood structures received even more damages.

“Some houses are gone,” Leroy said. The Rapid Response team toured a mountainous area where they found elderly people living in houses without roofs and walls.

“I don’t think pictures could ever show what we experienced,” Leroy said. “We got into some very low income communities. There are so many needs, I don’t even know where to start.”

Maria was the strongest storm to hit Puerto Rico in 90 years. It made landfall on the island on September 25 as a category 4 hurricane. We plan to set up two bases in Puerto Rico from where volunteers will do cleanup and rebuilding. The estimated cost for this project is $500,000.

Hurricane Maria also brought a large amount of devastation to the small island of Dominica when it hit as a category 5 storm. “No part of the island, no one, was left untouched,” reported our contact. We are researching how we can best respond to requests for help.

At the time of this writing, hundreds of thousands of people in Central America are facing flooding and landslides from Tropical Storm Nate. We will likely respond to this disaster, as well.

This has been an unusually busy hurricane season. Please give only as you feel led. Your support and prayers have been a great blessing for those whose lives were affected by the recent, devastating hurricanes. God bless you!