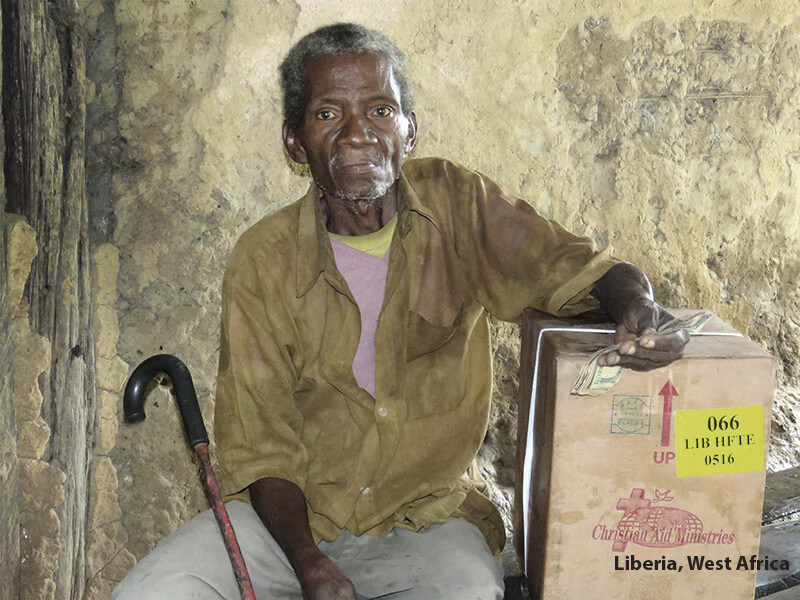 Yarkpowolo in Liberia has a disease in his feet and can’t walk far. A neighbor man carried Yarkpowolo on his back to the CAM distribution site.

Frederick, an elderly man in Liberia, spends every day in bed, completely dependent on the mercy of others to survive. His wife abandoned him, and no other family members help care for him. Some people cook his food and provide a little care, but the help is minimal. Frederick has a wheelchair, but no one wants to lift him out of his bed into it. He had found a young man willing to care for him, only to discover the young man was stealing from him.

Forty years ago, life looked promising for Frederick. He had spent some time in Germany and then returned to Liberia and found a job—something many Liberians only dream of. But then a car accident changed his life. His spinal cord was severely damaged and most of his body was left paralyzed.

Frederick has faced unimaginable hardships throughout his life. During Liberia’s civil war in the late 1990s, he was left to himself for a time and nearly died. The people who found him thought he was dead and were ready to bury him. But when they touched him, they discovered he was still alive.

Frederick is one of 1,600 elderly people who receive a Help-for-the-Elderly food parcel each month. While the parcel, along with a little cash, doesn’t solve all his problems, this reliable source of food and income eliminates at least one worry for him. “It helps a lot,” he says. “I am thankful to God. God bless all those who make this possible!” Frederick also finds encouragement in the Seed of Truth magazine or other Christian literature that comes with the parcel.

Recently some of our staff visited Frederick. As they were leaving, knowing that Frederick spoke some German, one of them said, “Gott ist de liebe” (God is love).
Frederick, without a hint of bitterness for his difficult circumstances, replied, “Yes, to me, God is enough.”

In Liberia, Kenya, Romania, India, the Middle East, and other impoverished parts of the world, elderly people are some of the most vulnerable people CAM encounters. Some have been abandoned by their families and left to die. Sometimes family members care about them but don’t have enough food to feed their own children. They are forced to choose who to help—their children or their parents.

“Many elderly folks are just barely surviving because they cannot work at all anymore,” says Luke Kurtz, CAM’s Kenya field director. “They would not be able to survive were it not for CAM’s support along with the little they receive from family and friends.”

Lonely, elderly people enjoy the visits from CAM workers when they deliver the food parcels. “Recipients that are feeble, lonely, and without many financial resources treasure the food and fellowship the parcels bring,” reports Ellis Schrock, distribution director in Romania.

Because of the many needs, Help-for-the-Elderly food parcels are in very high demand. As funding becomes available, we would like to expand this program to help more suffering, elderly people. If you would like to help, please click below to give a one-time gift or start a monthly sponsorship.