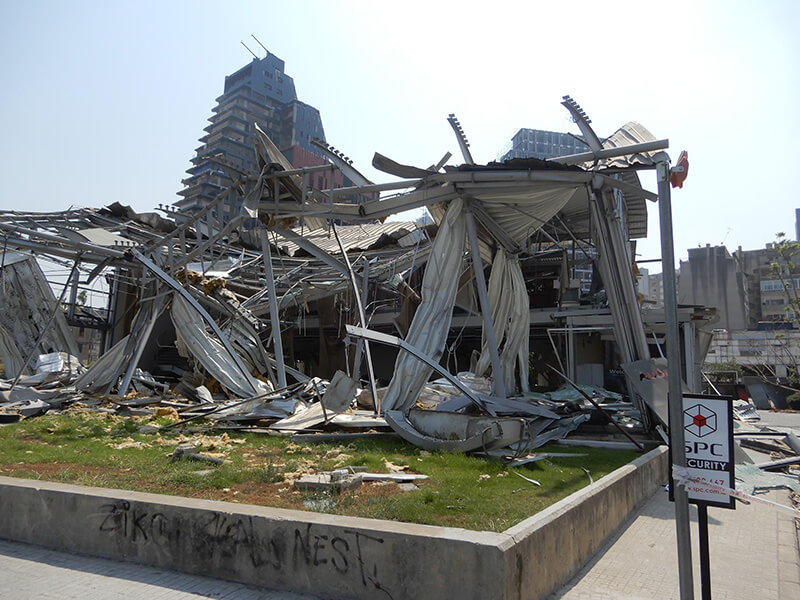 Structures within five miles of the explosion sustained extensive damage and broken windows, leaving more than 300,000 people without homes.

In early August, one of the world’s most powerful explosions rocked Beirut, Lebanon. 2,750 tons of ammonium nitrate, commonly used as an agricultural fertilizer, ignited in a warehouse on the port. In the aftermath of the explosion lay a path of destruction and rubble.

A CAM staff member recently traveled to Lebanon to meet with contacts and evaluate needs resulting from the explosion. He found immense damage in Beirut. Windows are blown out, door frames pushed in, structures damaged, and many houses and apartments partially collapsed or completely destroyed. 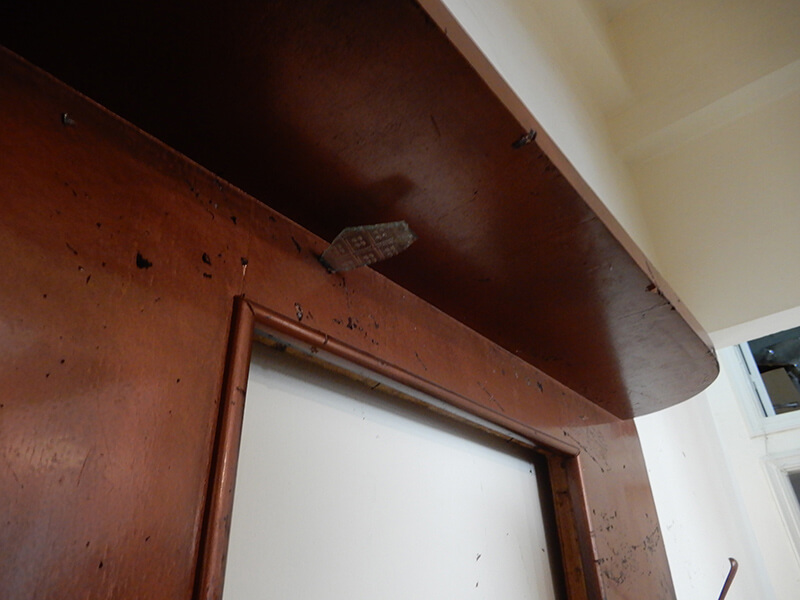 Note the piece of glass stuck into the wood from the force of the explosion. 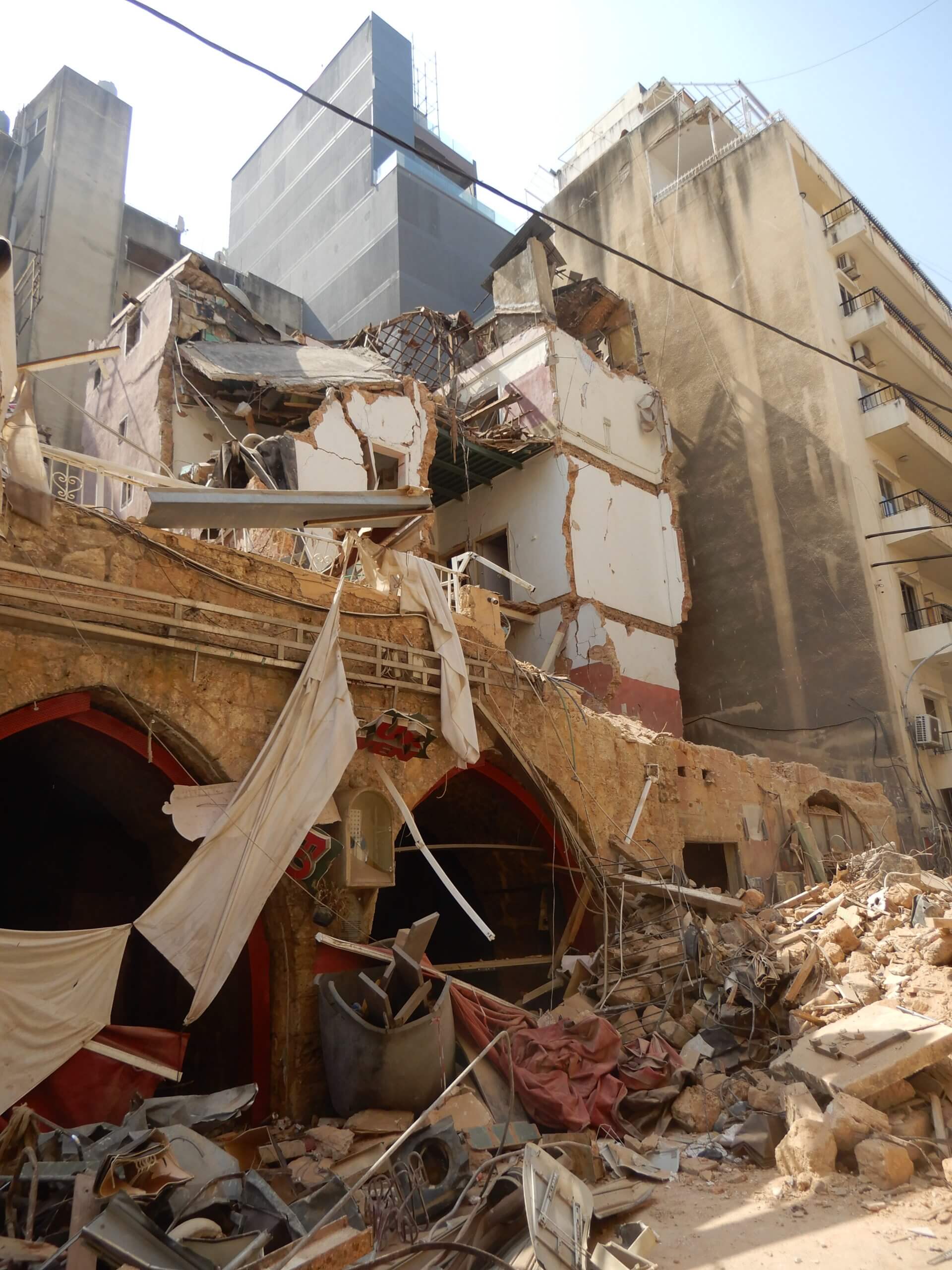 CAM plans to work with contacts to reach out in various ways. One of these ways will be to help repair houses that sustained damage from the explosion. 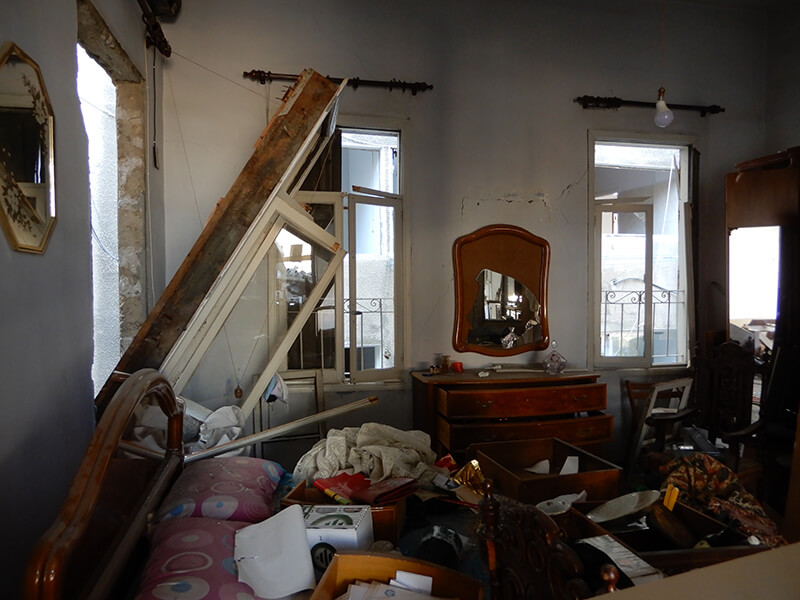 The repair project includes replacing doors and windows, painting walls damaged by the spray of broken glass, and fixing electrical and plumbing fixtures. Cleaning supplies, food, and other essential items will be provided for approximately 750 families affected by the explosion.

The path to recovery in Beirut will be long and difficult. Pray for those who are suffering as a result of the explosion. Pray also for our staff and contacts as they seek ways to help. If you wish to help with this project, you may use the donate option below.

CAM is researching ways to help in the wake of the massive explosion in Beirut. This explosion in the port of Beirut, Lebanon, created a shock wave that engulfed the city in early August. 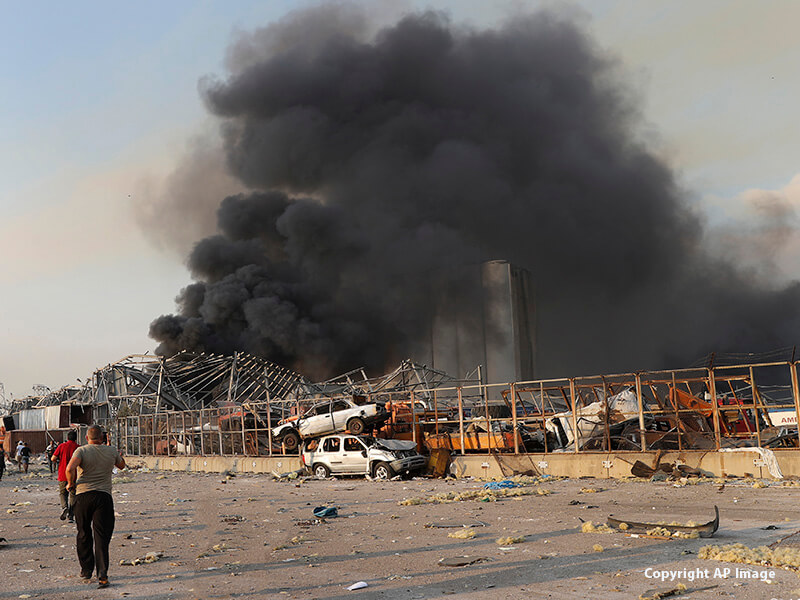 A massive 2,750 tons of ammonium nitrate, commonly used as an agricultural fertilizer, ignited in a warehouse at the port. It left behind a path of devastation and rubble. Crushed buildings, smashed vehicles, and shattered glass filled Beirut’s streets. “Half of the city’s windows and doors . . . are broken,” shared a contact in the country. Structures within five miles of the explosion sustained damage and broken windows.

This blast is among the top ten most powerful explosions ever recorded. People in Cyprus, a Mediterranean island 150 miles from Beirut, heard and felt the explosion. A CAM contact who lives a distance from the city said his house shook as if the explosion was next door. The blast appears to be accidental, but it is still under investigation. In any case, the impact causes many innocent people to suffer. The people of Lebanon endured a civil war from 1975 to 1990. Many say this blast was worse than anything they experienced during the war.

Syrian refugees are among those affected by this tragedy. Many of them lost loved ones or homes. An estimated 200,000 refugees made Beirut their home after fleeing from horrific war in Syria. Now they again face sorrow and displacement.

The city’s medical system struggled to keep up as the injured sought refuge in local hospitals following the blast. The explosion caused severe damage to several medical facilities, killing patients and medical personnel. Three hospitals received damage to the point that they are beyond operation. Others accepted patients amid damage and rubble. One hospital resorted to treating patients on the street. “The situation is a disaster,” shared a nurse. “There’s nothing left.”

Lebanon’s economy suffers from the blast

Lebanon manages most of their imported goods at the Beirut port. The country imports much of its goods, so the damage to this port is devastating to the already struggling economy. The explosion destroyed thousands of tons of imported wheat and grain stored at the port. This loss enhances fears of a food shortage and rising food prices.

Protests sprang up in Beirut following the deadly explosion. This added tension as citizens protested their government’s response to the catastrophe. The following week, Prime Minister Hassan Diab and his cabinet resigned their positions in government. The political upheaval and lack of leadership brings further suffering to the country.

A humanitarian crisis was looming in Lebanon even before the explosion. This catastrophic blast in Beirut follows other huge problems in the country. During the past years, refugees streamed into Lebanon, bringing complexities to the local economy. Political corruption, inflation, sanctions, banking problems, and other troubles continue to weaken the country. Recently coronavirus lockdowns further damaged the economy.

The effects of this destructive blast will likely bring long-lasting struggles for thousands of people. CAM is researching ways to provide food, hygiene items, house repairs, and other ongoing aid in the wake of the devastating explosion in Beirut. If you would like to help bring hope in this time of desperation, your contribution will be a blessing. Please join us in prayer for the people of Beirut, Lebanon. We desire that the aid provided will point them to Christ, the ultimate Deliverer and Savior.

Thank you and God bless you!

This project is sufficiently funded.