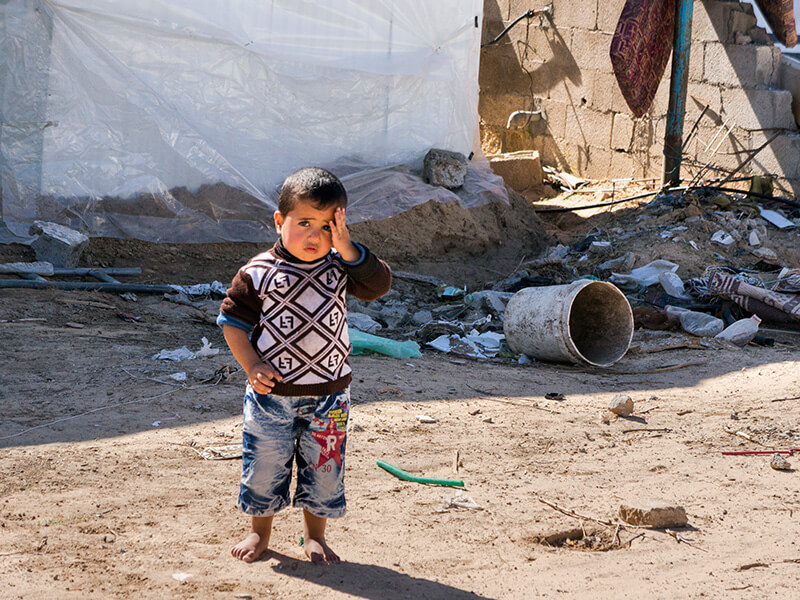 A Gazan man opened his fridge door and showed our contact the two tomatoes and two bottles of water it contained. That was all the food he had on hand. “We need you to feed my people,” he pled.

Desperate Gazans, forgotten by much of the world, are stranded in one of the most crowded, miserable places on earth. Short on medicine, electricity, and food, they live inside what is often referred to as an open-air prison.

Recent uptick in fighting has increased the misery

Gaza, a sliver of land between Israel and Egypt, is overpopulated and impoverished. The frequent wars with Israel have damaged Gaza’s infrastructure. Its citizens used to send their wares, anything from strawberries to furniture, to Israel and Egypt. But now the market is shut down as both countries have attempted to close their borders. Thousands of people are jobless and hungry. In recent months, an uptick in fighting between Israel and Hamas, the Islamic terrorist group that controls Gaza, has only increased the misery and uncertainty.

“Many times Mom collects old dry bread, adds water to it, and puts it back in the fire to rebake it to make it edible.” –Child in Gaza

Families are in desperate need of food

Despite these desperate times, some aid groups have withdrawn support from Gaza due to political reasons. One of our contacts in Gaza visited some families to investigate needs. He asked the children in one home, “What do you like to eat? Do you like milk and chicken?”

The children said they had not eaten chicken or other meat for two months. “We eat bread,” one child said. “Many times Mom collects old dry bread, adds water to it, and puts it back in the fire to rebake it to make it edible.”

People are also reporting severe medical needs and no money for treatment. Some are dying. Our contact visited a family where the mom had cancer. She is unable to get treatment because they simply don’t have enough money.

CAM is providing aid for the suffering

CAM staff members in the Middle East are working with reliable contacts in Gaza to help meet many pressing needs. Throughout the coming months, we plan to provide food, funds for medical needs, and other aid for the suffering people of Gaza. Our projected budget for this project is $150,000. Our staff members will travel into Gaza periodically to investigate needs and oversee distribution work.

Join us in praying for the people of Gaza as they face an uncertain future.