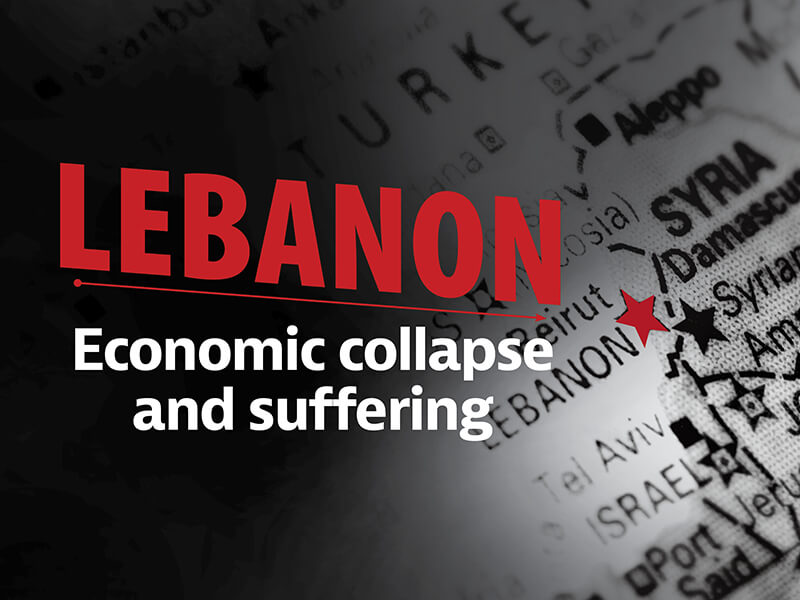 Dasia* is one of thousands of Lebanese who knows the realities of a collapsing economy, corrupt leadership, and rising poverty. “Suddenly we all became very poor,” this 67-year-old woman from Lebanon says. “We reduced our food consumption. We barely eat meat nowadays.”

Dasia’s recent cancer diagnosis adds even more financial pressure to her family. “I am sick, and our salaries are worth nothing now. My children are in debt because of my treatment.”

This reality is drastically different than decades ago when people labeled Lebanon “the Switzerland of the Middle East” due to its mountainous landscapes, modern cities, and financial stability.

Lebanon at a glance

Lebanon’s economic crisis stems from various issues. These include the following:

This influx in the past decade strained Lebanon’s resources and job markets.

This explosion killed and injured hundreds of people. It left many more homeless and caused billions of dollars of damage. Many people are still trying to rebuild their lives two years after the catastrophe.

How are these factors affecting Lebanon’s common people?

“They can’t afford to live!” says a CAM staff member who visited the country. The currency is rapidly losing value and people are suddenly finding that their incomes and savings are worth much less than before. At the same time, prices of food, fuel, and other basic necessities are soaring. Frustrations with the political corruption and lack of leadership have led to protests across the country.

A contact from Lebanon said, “Lately, you can see many old Lebanese people searching in the garbage bins for food or begging on streets.” Many people who struggle with health issues face the choice of whether to use their money to buy food or receive medical care.

Thousands of Syrian refugees in Lebanon already experienced great needs. For them, life has deteriorated even further. Some face blame for the economic troubles and others are losing their jobs.

“Yes, I can go on and on listing all the challenges we face in our country,” says a contact in Lebanon, “but I will be wrong if I fail to tell you that God is giving us amazing opportunities . . .” He shares that large numbers of people are hungry for Truth.

Supplying food, hygiene items, and other aid to struggling people gives opportunities to meet huge physical needs and point to the Bread of Life, Jesus. We are working with trusted contacts to provide aid to people in Lebanon in Jesus’ name.

After contacts visited a Lebanese mother and gave her food and hygiene items, she said, “I know that my Jesus never leaves nor forsakes me. He is taking care of me during these hard times.”

In Lebanon’s economic collapse, many people are suffering. Please pray for the people and future of Lebanon. Above all, pray that peace and forgiveness in Jesus would reign in the land.

To help support the Lebanon Economic Crisis please click below to give a one-time gift.