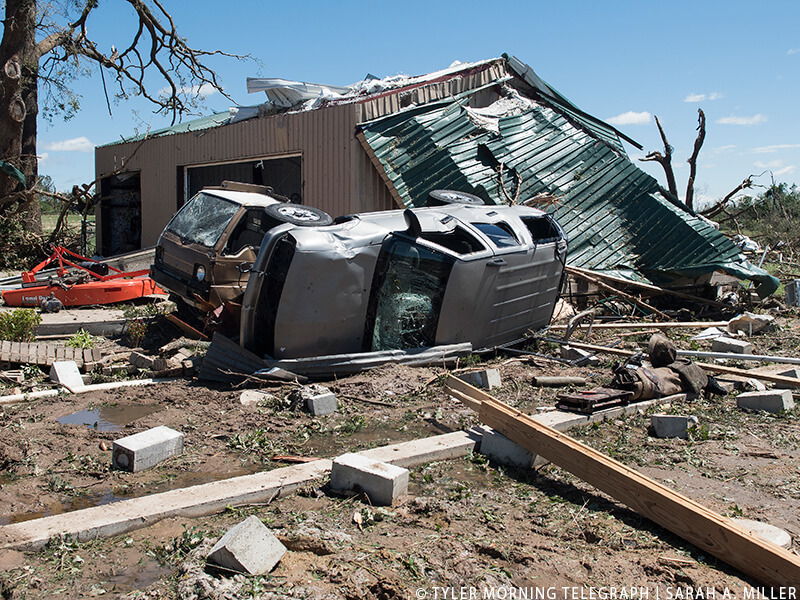 Rapid Response Update: Flood cleanup is ongoing in Thomasville and Van Buren, Missouri. The Missouri team is also keeping an eye on the St. Louis area, which was still flooded at the beginning of the week.

Search and Rescue update: The bodies of the children who were swept away in the Arkansas flood have been recovered. The 4-year-old was soon recovered, but local authorities cancelled the search after several days of searching for the 18-month-old. Our Search and Rescue team continued the search and was able to recover the body. Please pray for the mother in this difficult time.

Severe Storms in the U.S.!

A severe system of storms swirled through the central United States over the weekend, bringing with it a devastating combination of tornadoes, hail, torrential rains, and flooding. Thousands lost homes and businesses, and at least 16 people died. About 80 million people are still at risk as the storm system moves toward the eastern states.

A number of Rapid Response teams are out investigating damages and starting with cleanup. Others are preparing to move in to damaged areas when the weather subsides.

Missouri team member Jay Martin is trying to get into Waynesville, Missouri, a heavily affected area 60 miles from his home, but finds he has to drive several hundred miles out of the way due to flooded roads. “It’s chaos,” he says. “The southern half of Missouri is flooded.”

Some of the rivers in Missouri still have not crested, and more flooding is expected as the week progresses. The team expects to find significant damages once they get into the flooded towns. “Cleanup might go for several weeks,” Jay says.

Our Arkansas and Illinois Search and Rescue teams are helping to search for two children who were swept away in the flooding in Arkansas. A mother became stranded while trying to cross a flooded roadway. She got out of the vehicle, but as she unbuckled her two children, aged eighteen months and four years old, the vehicle and her children were swept away by the strong flood current.

In northeast Texas, four tornadoes touched down, damaging or destroying 5,000 homes and businesses. “The damages are horrible . . .” said one survivor. “My friends’ homes are destroyed. Buildings are completely gone.”

Pray for our teams as they interact with those who suffer devastation and loss. Pray also for the survivors and those still in the path of danger.