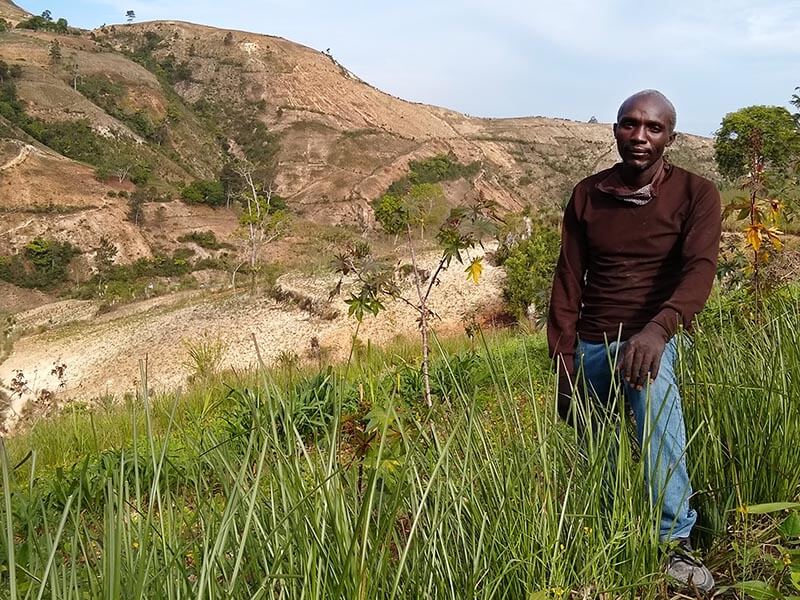 Edmond from Haiti was once so discouraged with farming that he quit. Then he discovered tips through SALT Agri-Plus that made a huge difference.

According to God’s mandate in Deuteronomy 8:3, people shall not live by bread alone, but by every word that comes from God. Thus, we are to live by bread, but we are also to live by the Word of God. When these two things are combined for the agriculturist in an intentional way, it leads to all kinds of exciting opportunities, discoveries, and adventures.”*

In Haiti, we are excited to find ways to share the Bread of Life with farmers while finding ways to fill the hungry farmer’s empty dinner pail.

As our Agri-Plus technician Edmond says, “I used to be happy with a three-fold harvest, but now I look for ways to increase my yields every year.” At one point Edmond was so discouraged with the unprofitability of farming that he quit farming his land in the mountains and went to changing money at the border. But after attending SALT Agri-Plus teaching meetings, he saw there still is potential in farming. He is now trying to get fifteen-fold yields on his black beans while most farmers are still happy with three-fold yields.

Edmond passionately works to find ways to bring the soil back to life. It was after we saw him trying things on his own that we hired him as a SALT Agri-Plus technician. He tirelessly experiments and pleads with farmers to change their practices that degrade the soil.

The recent growing season was a powerful testimony. It rained on March 12, and Edmond planted his beans on March 24. For two months, no rain came. All the land surrounding Edmondʼs is now 100 percent crop failure, while his own land is green. Edmond will have beans to harvest despite the lack of rain! It will not be fifteen-fold, but it will be a harvest in the middle of a drought. This is because Edmond applied principles he learned through Agri-Plus. Three years ago, Edmond planted vetiver grass hedges for erosion control, which built up his topsoil. Unlike the traditional farming method in Haiti, Edmond doesn’t burn the crop residue. He also discovered the value of covering the soil with mulch to retain moisture and enrich the soil.

Edmond is excited about farming to the glory of God. He deeply appreciates that SALT Agri-Plus focuses on teaching about people’s relationship with God. His goal is to find ways to make farming more profitable, so that when the farming families are no longer hungry, they will praise God!

Edmond likes this quote from Don Elias Sanchez of Honduras, “If the mind of a campesino (a peasant farmer) is a desert, his farm will look like a desert.” The real goal of Agri-Plus in Haiti is to change the way farmers think about farming. This will not happen quickly or easily, so we must commit to being a long-term agent of change.

Edmond gives God all the glory. He is a living, walking preacher of creation care and desires to do things God’s way in all areas of life.

Note: We recently received word that Edmond is struggling with ongoing health issues. Join us in praying for him!

To help support the SALT Agri-Plus program, please click below to give a one-time gift or start a monthly sponsorship.