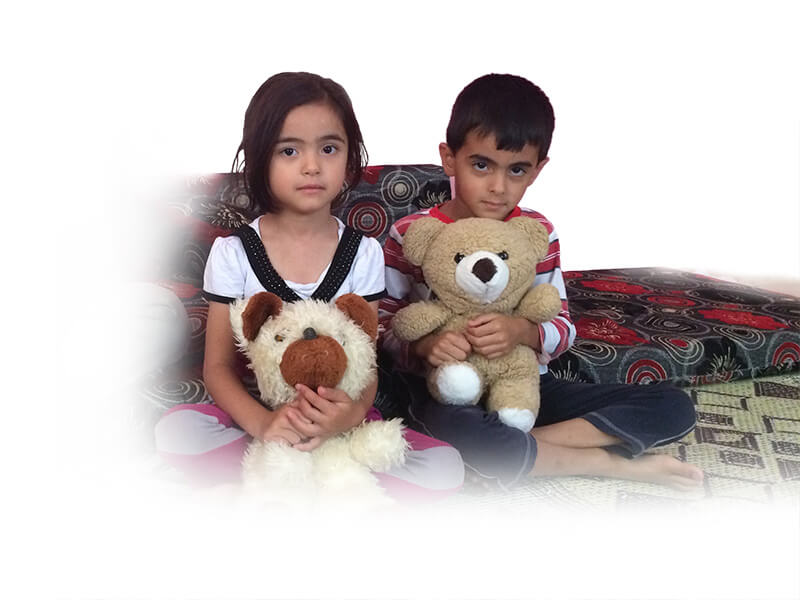 The Ball That Didn’t Bounce

Sami* and Samira* used to live a normal life in Syria. But then war came to their country. One day when Samira was only a baby, a bomb hit their house. Samira’s mom and dad ran out of the house with their two children. Or so they thought.

Samira had been wrapped up in a blanket inside the house, but she had crawled out when her mom was not looking. Thinking her baby was still in the blanket, Samira’s mom had grabbed the blanket and ran outside.

Once they had rushed down the street away from the house, Samira’s father asked, “Where is Samira?” He opened the blanket, but there was no baby inside! Samira’s mother was so shocked, she collapsed on the street, but her father ran back to the house and found Samira. Thankfully she wasn’t hurt.

After that, for many months, the family fled from one place in Syria to another, but each time the war followed them. Finally, they could no longer find a safe place to live in Syria, so they decided to move to another country called Jordan.

But just before they left, some soldiers came and took Sami and Samira’s father away. Sami and Samira didn’t know what happened to him and had to go to Jordan alone with their mother.

In Jordan, the family had no place to live, so they went to stay in a refugee camp with many other people. Sami and Samira wished they could see their father. They missed him very much. But there were thousands of refugees in Jordan. How would their father find them?

One day a miracle happened, and Sami and Samira’s father showed up at their camp. He had found them!

After some time, the family moved from the refugee camp to a small house close by. Although Sami and Samira were happy that their father had come back, they were still very sad and frightened. They remembered the loud sounds of bombs hitting their house. They remembered the soldiers who came and took their father away. Sometimes when he heard a loud bang, Sami cried. He would not play or even talk. He just sat inside staring into space. Samira cried whenever she was not touching her mom.

One day, a Christian worker came to visit them and saw how sad they were. This made him sad too. He went home and prayed for them many times and often went back to visit. One day he brought some friends along. One of them had a gift for Sami. It was a small plastic ball. He placed the ball in Sami’s hand and closed his fingers around it. Sami held the ball for a while and then dropped it. The ball fell to the floor in front of him. And then a miraculous thing happened! Normally when a ball drops, it bounces or rolls away, right? This ball didn’t. It stayed motionless for a few moments after it hit the floor. After sitting there for a bit, the ball started rolling slowly across the floor by itself.

When Sami saw this, he jumped up and ran after the ball. He picked it up. He looked at the ball, looked around the room, and looked at himself. It was like he was waking up. Suddenly, Sami started laughing and everyone else in the room laughed with him. He started throwing the ball and playing with it. This was the start of Sami being happy again. Samira also started being less scared. She no longer cried if she was not touching her mom.

Now when Christian workers visit Samira and Sami to bring them food, they see the children behaving like normal boys and girls. They like to play with their two chickens, and they like to talk with visitors.

Sami and Samira’s mom say that the miracle of the ball not bouncing and Sami and Samira laughing again happened because Christians are praying for them.

Throughout the Middle East, there are many refugee children like Sami and Samira. Pray for them.

If you would like to help provide food for refugee families, please choose from the options below.

A lot of refugee children aren’t able to go to school because their parents don’t have money to send them, or schools won’t accept them. If you would like to help some of these children go to Christian schools, you can donate to Sponsor-A-Refugee-Child