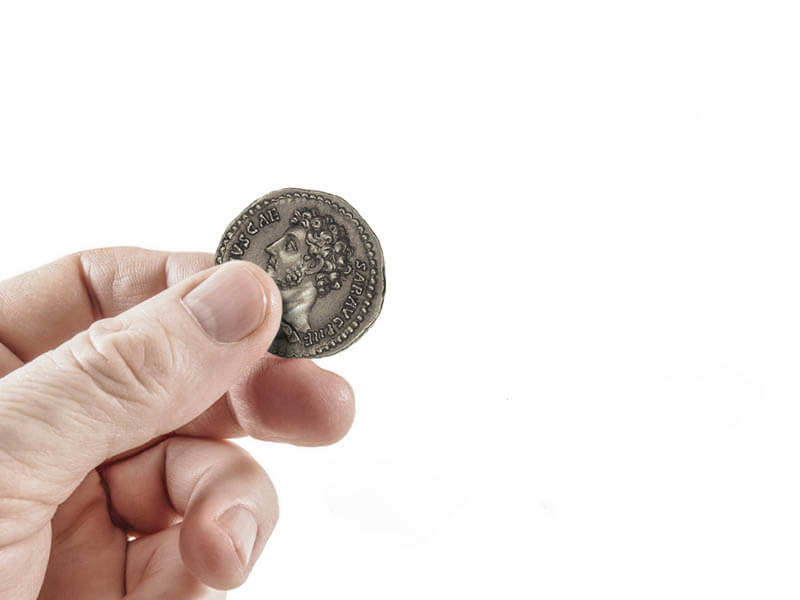 In an ancient land riven by political strife and religious fervor, a wise man was challenged by his enemies and critics. In an attempt to force him to choose sides, they joined forces and presented what they thought was an impossible question to answer in a way that was satisfactory to both sides. They asked, “Is it lawful to give tribute unto Caesar, or not?” Leaning forward, they eagerly awaited his response; if he said “yes,” surely he was advocating blasphemy because this Caesar had set up himself as divine. If “no,” he would be promoting rebellion and should be arrested for treason.

Seeing their flattery and hypocrisy, the man simply asked them for the coin used to pay the tribute. Quickly, one of the men reached into his pocket and brought out this hated coin that was minted by Caesar, proclaimed him as divine, and stipulated as the only accepted payment for the tribute.

Taking the coin, the man held it out, asking, “Whose image and writing do you see on this coin?” Now surely, his questioners thought, he knows who this is. No harm could ever come from answering such an elementary question, so they said “Caesar’s.”

Handing the coin back, Jesus, the King of kings, peered at His inquisitors and replied, “Render therefore unto Caesar the things which are Caesar’s, and unto God the things that are God’s.” Stunned by the wisdom of His declaration and confounded in their attempt to entrap him by His own words, His enemies were left speechless. Sadly, but incredulous still, they slouched away in utter defeat.

How should we view government and taxes?

“Government and taxes” is a topic that many learned and noble men have debated and discussed for centuries. What is the right way to think and act about them? Do we join sides with the government or do we rebel against it? Do we pay our taxes or don’t we pay our taxes? Where can we go for wisdom on these matters? Do we look to the ancient philosophers who wrote extensively on the role of the state in the life of its citizens? Do we turn to enlightenment thinkers and their ideas on how a working society should be governed and taxed? Would we not be better prepared to deal with these questions if we look to the words of the One who taught us to pray, “Thy kingdom come, thy will be done in earth as it is in heaven” or when He said, “But seek ye first the kingdom of God, and his righteousness?”

With these and other teachings, our Lord makes it clear that His followers’ primary allegiance is to the kingdom of heaven. He calls His followers to avoid the traps of power and fear upon which the foundations of worldly kingdoms rest. Rather, He calls His disciples to live by a more perfect law of love. He calls them to use their talents and the fruit of their labors for the benefit of the King of kings and His kingdom.

Notice where the obligation to pay was based on. By His question and His response to the Pharisees and Herodians, Jesus indicated the importance of the impressed image. In other words, if you deal with Caesar’s things, be prepared to give back to him what he demands in taxes. If you bear the image of God and His writing is on your heart, then give back to God all He asks of you. Christ confirmed this truth when He said, “Thou shalt love the Lord thy God with all thy heart, and with all thy soul, and with all thy strength, and with all thy mind.”

From a stewardship perspective, as we look at the laws our current “Caesar” has established, we understand that we should pay all the taxes we legally owe but not more than that. Interestingly enough, even the representatives of Caesar agree with this thought. Notice the words of Judge Billings Learned Hand: “Anyone may arrange his affairs so that his taxes shall be as low as possible; he is not bound to choose that pattern which best pays the treasury. There is not even a patriotic duty to increase one’s taxes. Over and over again the Courts have said that there is nothing sinister in so arranging affairs as to keep taxes as low as possible. Everyone does it, rich and poor alike and all do right, for nobody owes any public duty to pay more than the law demands.”

Caesar has claim on only the temporal and material things of life. If we deal with money that Caesar has created, then yes, be prepared to give everything back that he demands by law. However, as citizens of the heavenly kingdom we are primarily required to advance the interests of the King of kings. The dedication of our lives to Him and the careful stewardship of the resources entrusted to our care rightfully honors Him as Lord of all.

Moreover it is required in stewards, that a man be found faithful. 1 Corinthians 4:2