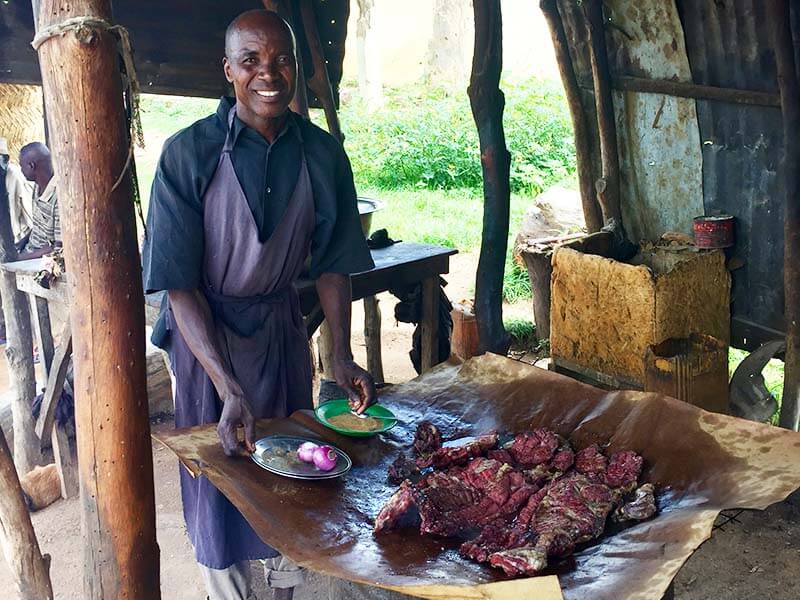 Zacharia uses only choice cuts of goat to make sure his meat is the best in the area.

“We give God the glory for using you”

Thousands in Nigeria have suffered at the hands of the Islamic terrorist group Boko Haram. Among those was Zacharia, his wife, and ten children.

One day they were warned about an impending attack on their village. The family escaped to hide in the bush area nearby. Soon after, Boko Haram militants swept into the area and wreaked havoc close to their home. It was no longer safe to return.

Zacharia and his family moved to another village where some friends encouraged them to come. But later, this area was also attacked. They were displaced two more times until, at last, they settled into a safe village.

A kind person in this village offered Zacharia some land to begin farming. This gave him a way to feed his family for a while. But the high price of seed and fertilizers made it hard for him to have money for the next season.

After joining a SALT* savings group in his area, Zacharia was able to borrow money from what the group had collectively saved. This helped his family get through a year’s farming without major problems. They were even able to save some money to prepare for the next season.

To help supplement his income, Zacharia opened a shop where he sells suya, which is goat meat tenderly roasted over coals. He uses only choice cuts of goat to make sure his meat is the best in the area.

Zacharia’s shop does not stand out for its impressive structure or location. But the warmth and gentleness found inside draws people in and makes them comfortable. Though life has been hard for Zacharia, his faith is in the Lord Jesus and the help he has received through the SALT savings group gives him hope. He says, “We give God the glory for using you to bring the SALT program here. We are so grateful for this program.”

To help support the Salt Microfinance Solutions program, please click below to give a one-time gift or start a monthly sponsorship