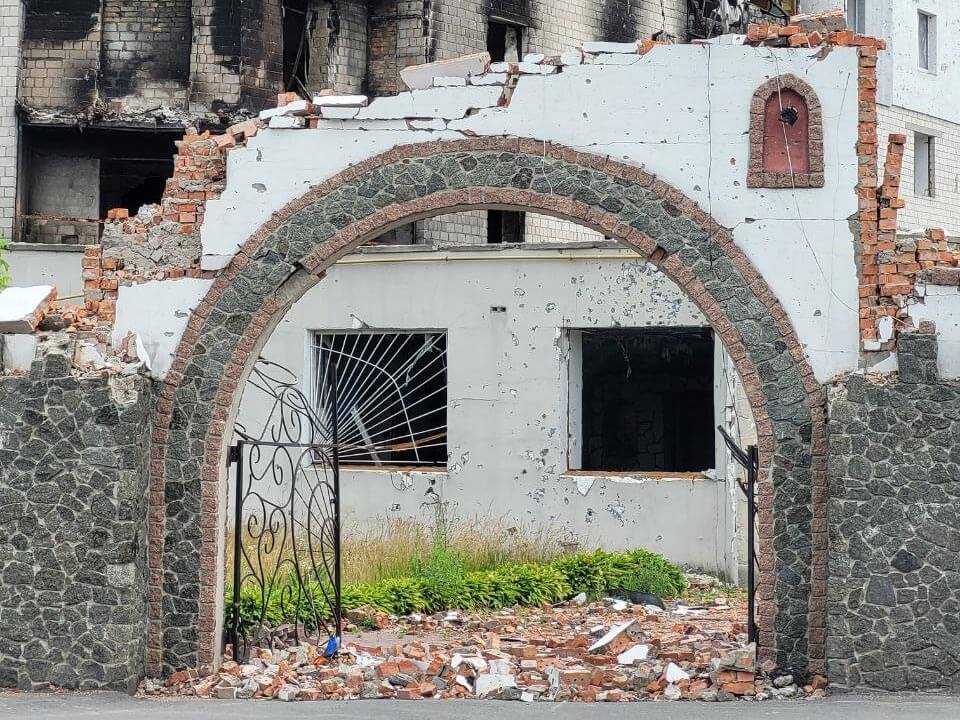 We see much destruction and heartbreak while driving across Ukraine. Beautiful homes become graveyards and junkyards. Stately trees are splintered like matches. Buildings, roads, and fences are ruined or permanently scarred. This war has wounded thousands of lives.

Will healing ever come? I wondered.

Then I saw it. A photo of a fence that spoke volumes. It was scarred by shrapnel and bullets, like so many others along the street, but it carried a message of hope. With a steady hand and a paintbrush, someone had painted flowers around the bullet holes. Now, instead of dozens of unsightly punctures, flowers are scattered across the fence, each one bearing a scar from a bullet or shrapnel. 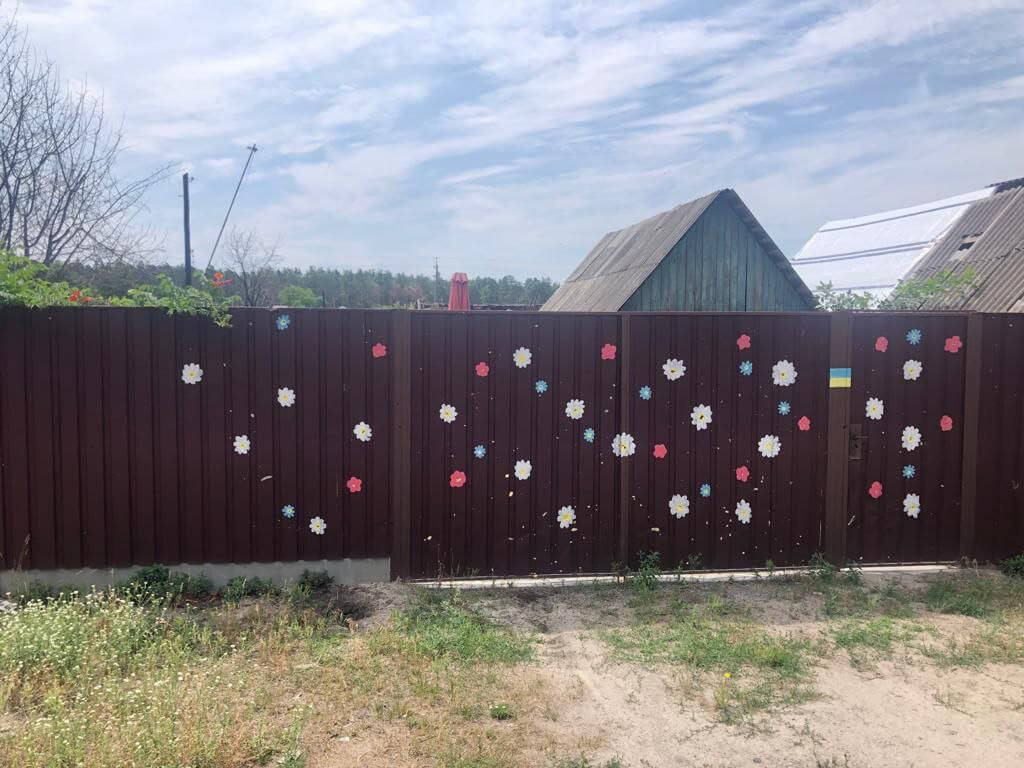 Perhaps someday this war will end and life will be rebuilt. Maybe eventually the heart-wrenching aches will find relief and children can sleep without haunting fears, while men and women live their dreams instead of their nightmares. Perhaps healing will come, if not in this life, then most certainly in the one to come.

While here on earth, scars will remain. But the flowers on the fence and the scarred hands of my Savior remind us that there can be beauty in the scars. Like the songwriter expressed, I am broken, torn apart. Take the pieces of this heart, and heal the wound, but leave the scar. Don’t let me forget everything You’ve done for me. Don’t let me forget the beauty in suffering. Heal the wound, but leave the scar, a reminder of how merciful You are.

Perhaps God allows the scars to remain so we are reminded of His mercy and protection, and of His healing and grace.

Fear hung over the city of Rubezhnoye. Life under occupation was tough, especially for believers. 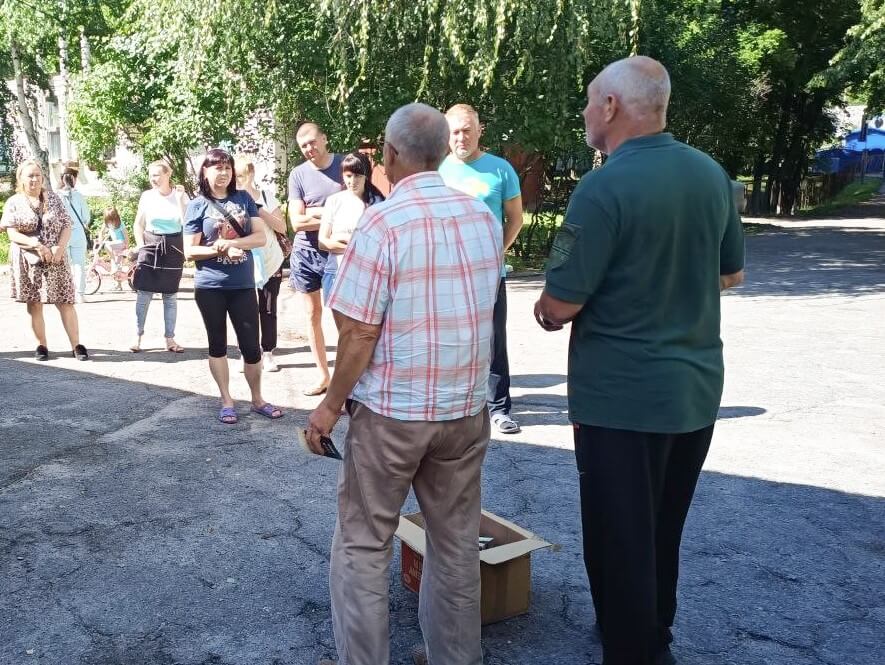 One night, eight drunken soldiers banged on the door of Vladimir and Tanya’s home with the intent of killing Vladimir, a Ukrainian pastor and chaplain. They dragged him away to shoot him. Vladimir was not scared of death. But he thought of his wife at home and of the church he pastored.

Thoughts rushed through his mind as he stood there, hands tied behind his back, waiting for the end. Suddenly he realized something had happened. He looked at the soldiers who had taken him captive. The gun was pointed at him, the trigger pulled, but nothing happened.

“Let me try,” another soldier said. He cocked his gun and aimed. Again, nothing happened.

“Fellows,” Vladimir said, “you want to kill me. If I die, everything will be all right for me. I am ready to meet God. I’ll go straight to heaven. But I am worried about you! Are you ready to meet God?”

An uneasy silence filled the night air. “May I pray for you?” Vladimir asked. He did not wait for an answer but fell on his knees and began to intercede for the soldiers around him. He did not pray for his own safety; he knew he was ready to go. But he pled to God to have mercy on the young soldiers, to show them what they were doing, and to help them find salvation. Suddenly, he realized he was not praying alone.

“Lord, be merciful to me a sinner! Forgive me, Lord!”

Vladimir recognized the voice of one of the soldiers. He listened as the soldier brokenly confessed his sins and asked God for forgiveness. The ground beneath them became holy as they prayed together. A Ukrainian pastor and a Russian soldier stood to their feet as brothers.

“You may go home,” the soldiers said. “We won’t shoot you after all.”

Tanya could not believe her eyes when her husband walked in the door minutes later.

She had feared she would never see him again. Her ears had been straining for the dreaded bang that would end her husband’s life. She heard the angry hollers and curses when they took him away. And now he was here, alive and unharmed.

The trauma of that night still haunts Tanya. God had spared her husband and shown Himself real. But fears still haunt her. “Every time I hear someone bang on the window, I panic.” Her voice broke, and she wiped tears from her eyes.

God can heal the wounds for Tanya, but scars remain, reminding her of God’s mercy in sparing her husband’s life.

Vladimir fervently serves the Lord, along with his son and son-in-law. They carry hope to many refugees living in their area.

They asked us to have a service and bring food parcels for the refugees living at a sanatorium in their village. “Thank you so much for the food!” the director of the refugee camp said. “The canned meat especially is a treat. We don’t get to eat a lot of meat here.”

Heartbreak and protection in one of Ukraine’s war zones

On July 14, the hearts and homes in our village shook as a boom shattered the silence. Was it just an airplane breaking the sound barrier? Or was it an intercepted missile? 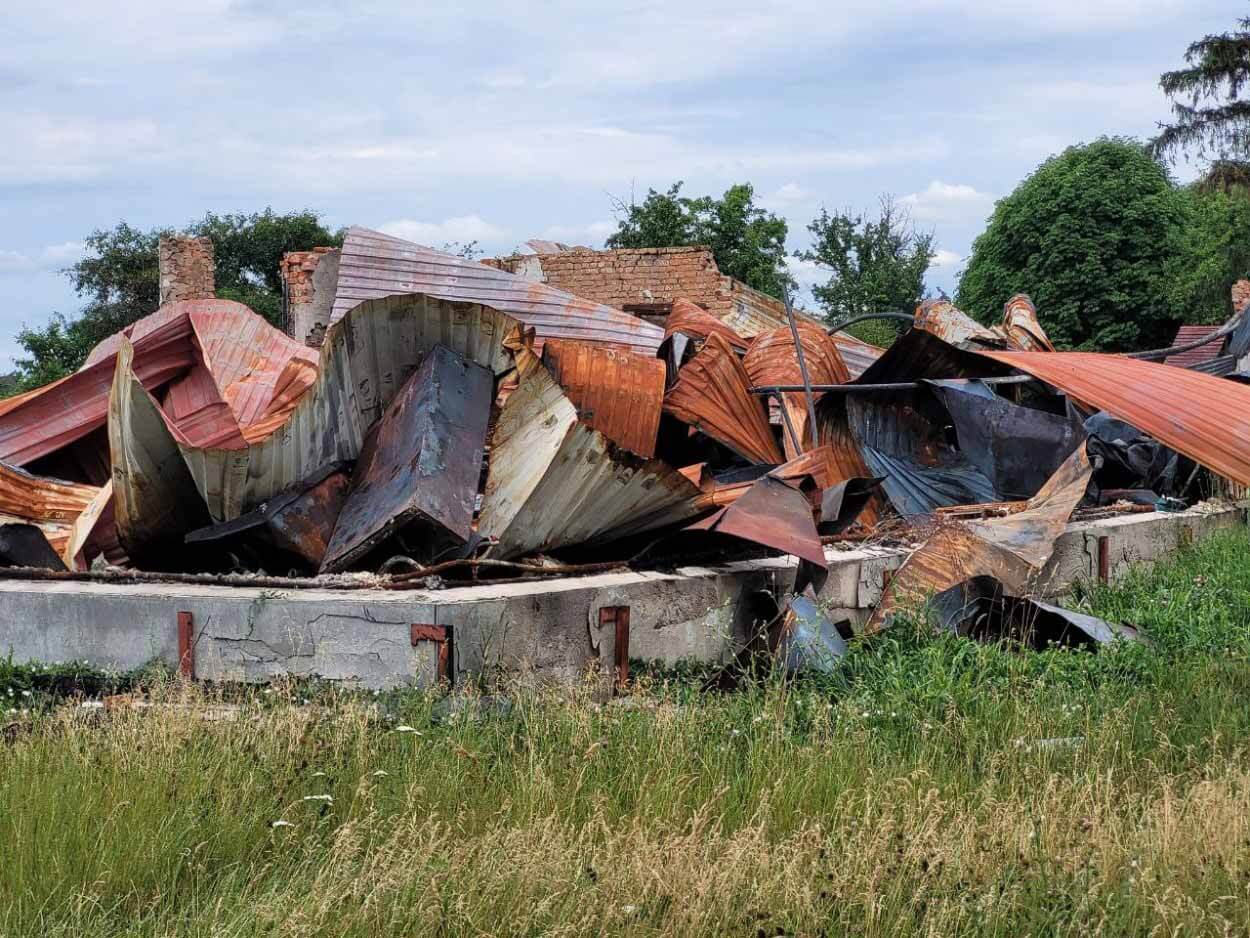 The remains of a children’s daycare center following a missile strike.

Everyone was on edge. Earlier in the morning, a missile struck Vinnitsia, a city two hours away. The missile hit a large shopping mall and business center. Over 20 people were killed and many more injured.

The stories and pictures were heartbreaking. Irina and her four-year old daughter were walking past the mall when the missile hit. Little Liza was killed and her mother is in the hospital in serious condition, still oblivious to the fact that her precious daughter with Down Syndrome is gone. Only God can heal Irina’s physical and emotional wounds.

Bogdon lives in an apartment across from the mall. The windows of his flat were shattered, but his family was spared. He will never forget the sight that met him when he hurried from his apartment to the blazing fire below. Limbs and mangled bodies lay among the rubble. The sight of a broken baby carriage and the remains of a mother and her child are seared forever in his mind.

The chain coffee shop where Vika worked was severely damaged when the missile fell. But Vika was spared. That morning she had been asked to fill in at another coffee shop in a different part of town.

Galya planned to stop at the business center to make some copies, but at the last minute changed her mind and went to another store instead.

Nadia and her son did not make it to their appointment at the business center because their car broke down on the way.

These stories are not just chance; they tell of God’s protection. I can’t help but wonder about the ones who are no longer here to tell their story. Why didn’t God protect them all?

While it is impossible to understand why God allows sorrow and heartbreak to cover this land, I find comfort in knowing that He is in control. I am grateful He allows us to see glimpses of His protecting hand in the midst of horror. And perhaps in the scars that will always remain, we can trace His beauty and His mercy. 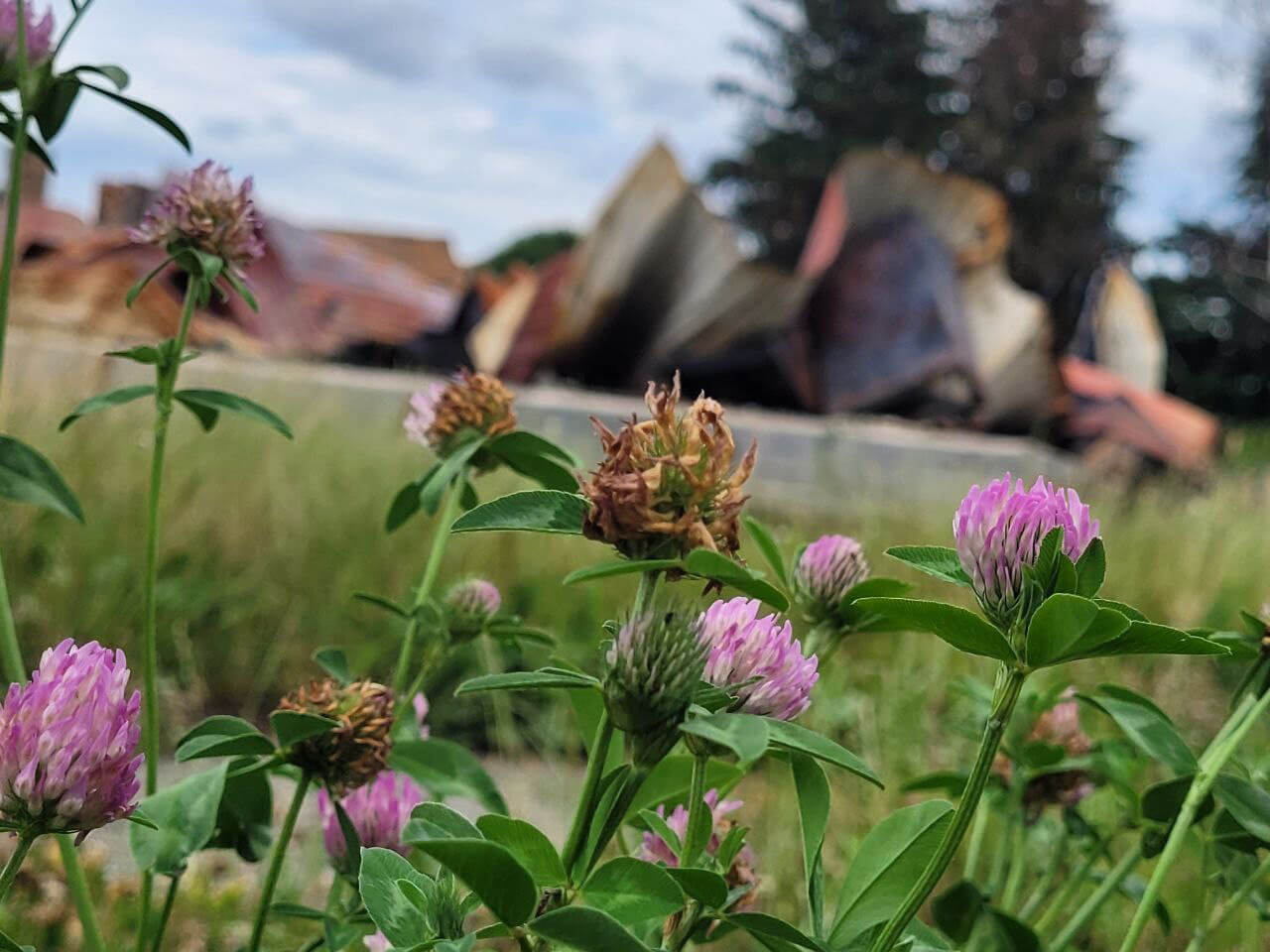 Flowers amid the ruin of the children’s daycare center.

Excerpts from Anya Hursh, a Mennonite contact in Ukraine 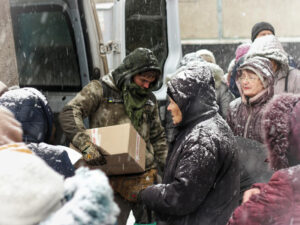 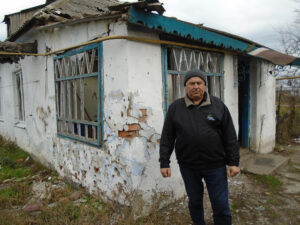 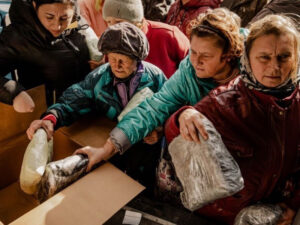