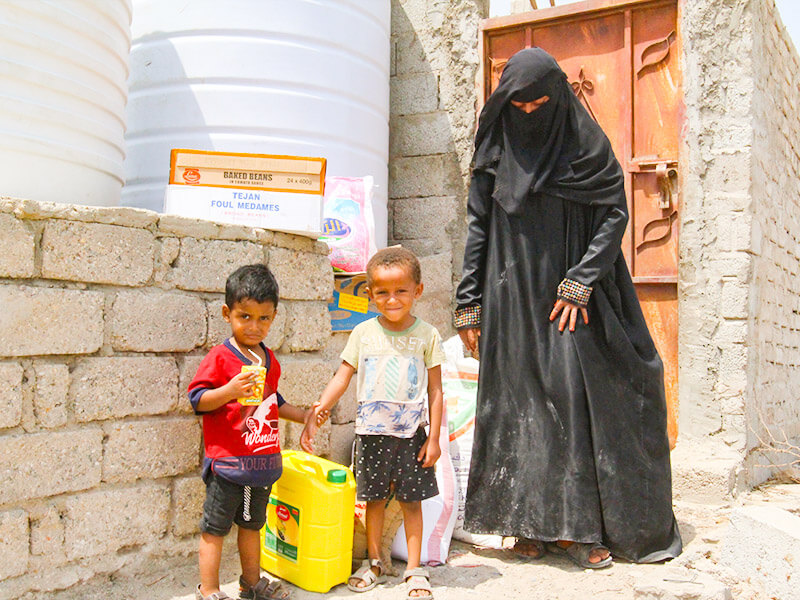 The people of Yemen face a difficult future as they cope with war, hunger, economic struggles, and water shortages. More than half of Yemen’s population is in need of humanitarian aid. Through two programs, Food for War-Torn Yemen and Water Systems for Yemen, supporters bring hope to desperate Yemenis.

Years of care and worry left 55-year-old Tamara* thin and pale. Poverty and hunger are part of life for widowed Tamara and her five children.

Tamara’s hardships increased when her village became a front line in Yemen’s civil war, forcing her family to flee to another village. They moved from house to house because she could not afford to pay rent.

Through the Food for War-Torn Yemen program, CAM contacts provided food for Tamara. “She was speechless,” our contact said, “when we told her they would be included among the beneficiaries. She and her children prayed for all of us and for all who help with these donations.”

Umar is a 35-year-old father in Yemen who cannot do physical labor because of a disability. His oldest son, 11-year-old Sana, was responsible to fetch water from a distant well that took him an hour and a half to reach on foot. Umar worried about his son’s safety. So despite his disability, he sometimes followed Sana.

Umar heard about water tanks that CAM contacts provide for needy Yemeni families. These water tanks hold rainwater that recipients catch from their roofs. Hoping to receive a tank to help ease his burden, Umar said, “Maybe it will be the last time my son and I will have to go so far for water.”

Umar’s hope for a water tank became reality because of you, our supporters.

To help support the Food for War-Torn Yemen program, please click below to give a one-time donation or to start a monthly sponsorship.