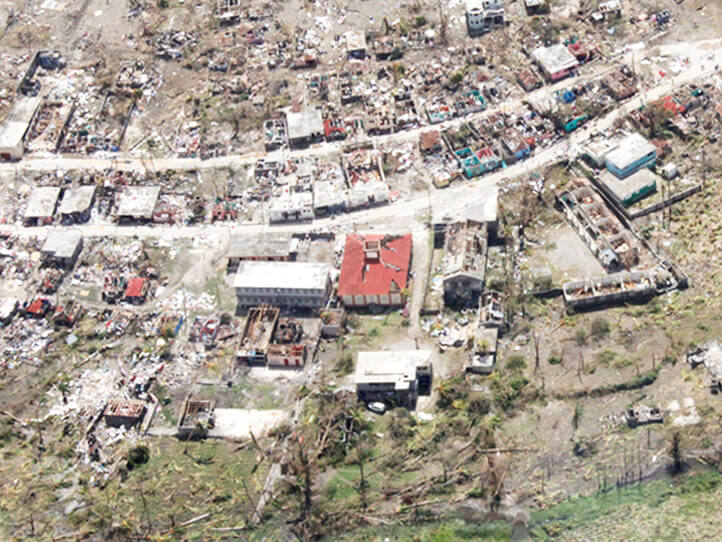 A CAM staff member who flew over southern Haiti on Friday estimated that, in the worst area, “85 percent of houses are flattened, gone, scattered to the winds.” He said, “It looks like a war zone.” Tens of thousands of homes have been destroyed.

Now that the storm has calmed, Haitians are trying to pull themselves together and begin cleanup. One man said he was going to the woods to look for his goats. Many animals died in the hurricane, which is a huge loss to impoverished Haitians who depend on their livestock for future income.

In addition, their crops are destroyed. “Their corn that was about at tasseling point is gone — they can’t depend on that. Fruit is knocked off the trees,” said a CAM contact in Haiti. Food sources are completely wiped out. Because of these losses, survival will be even more difficult in coming months.

One report from our staff said that in some ways the effects of the hurricane are “worse than the 2010 earthquake.”

CAM is starting a large-scale crisis project. Initial emergency aid will include an air shipment of tarps and water purification tablets, as well as distribution of food, roofing materials, medical supplies, and seeds. Much of our response will focus on long-term recovery, including rebuilding and repairing houses. We hope to help people in the mountains who are often neglected and the last to receive aid.

Today a CAM team is flying over southern Haiti to assess the damages and accessibility to villages. We have also scheduled an air shipment of 1,800 tarps to be flown into Haiti early next week. 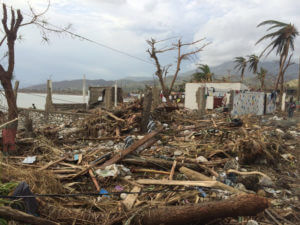 About 2,500 food parcels are being filled and loaded onto sea containers, along with Bible story books. They will be shipped to Haiti as soon as possible. We are also working on a shipment of medicines and medical supplies.

At least 800 people have been confirmed dead since Hurricane Mathew struck, but the death toll continues to rise as officials gain access to villages that had been cut off from the rest of Haiti.

Yesterday our contacts came upon the remains of a village where only a few of the 75-100 houses were standing. All the villagers had gathered in a small school building with a concrete roof that was still intact. “Everything was flattened, trees were down, many cows and goats were killed,” the contacts reported. Just past the village, the road was completely blocked by a large landslide. 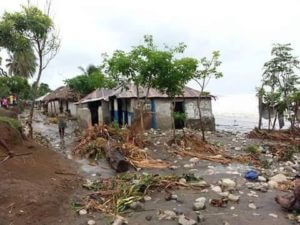 Immediate, urgent needs include clean water, food, tarps, road accessibility, and medical care. Please continue to pray for the emergency workers in Haiti and for the Haitians who face overwhelming losses and devastation.

Hurricane Matthew, a category 4 storm, made landfall in Haiti early Tuesday morning, hammering the island with heavy rain, powerful winds, and dangerous storm surges. The storm has ripped off roofs, destroyed homes, and flooded whole villages. Thousands are seeking emergency shelter while many others in remote areas remain vulnerable to life-threatening flash floods and mudslides.

“I’m afraid that many will lose their lives, because once their huts are blown away they will be totally unprotected,” said a CAM staff member from Haiti. Houses made of sticks and mud are no match for the 145 mph winds that have twisted off full grown trees and wreaked havoc in the southwestern part of the country.

CAM is in contact with our base and other missions in Haiti to keep tabs on the situation. One person from a heavily affected area was able to contact our staff during the storm and said the hurricane was “absolutely destroying southern Haiti.”

Our stateside staff members are communicating with our Haiti staff to prepare for what could be a large-scale crisis project. A container of aid that had been prepared for another country where CAM operates is being redirected to Haiti for hurricane victims. Initial emergency aid will include roofing, food, hygiene kits, water, and possibly an air shipment of medical supplies.

The future looks grim for the many impoverished Haitians who lost all they had in the storm. On top of their immediate emergency needs, they face the dread of deadly cholera and mosquito-borne diseases after the storm clears.

Please pray for Haitians who are suffering from Hurricane Matthew and for our staff members as they investigate needs and distribute emergency aid. If you wish to help hurricane victims, your gift will be a blessing.