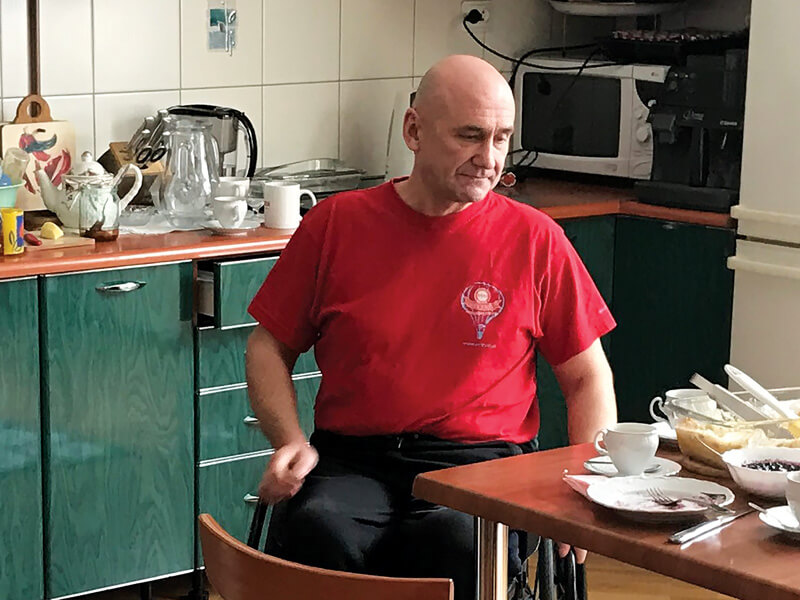 Vitali at his home in Ukraine.

Favorite Stories from the Bible

The Power of a Bible Story Book

While traveling through Western Europe on business, Vitali from Ukraine was involved in a terrible accident. As he lay on the pavement in excruciating pain with broken ribs puncturing his lungs, he heard the paramedics say, “He’s not gonna make it. Let him die.”

At that moment, Vitali remembered a Bible story book he had read six years earlier. His wife had brought it home after one of her students, a little boy from a Christian family, had given it and said, “Please take this and read it, and when you are finished, return it to me.”

Vitali had paged through the book haphazardly at first but then feared the boy and his family would question him, so he read the stories more thoroughly. Vitali’s wife returned the book, and Vitali promptly forgot about it. That is, until that fateful day when he lay near death’s door.

“It wasn’t my wife or my daughter I immediately thought about that day,” Vitali related. “It was God I thought about.”

Vitali had grown up in the Orthodox Church but did not know God personally. The memory of the Bible story book caused him to cry out to God. As he did, peace stole through his pain-filled body, and his labored breathing became easier.

For 11 months, Vitali lay in a hospital, slowly recovering. He was then sent home to adjust to life in a wheelchair. On Christmas a group of young people came to Vitali’s home to carol. “Why did you come?” he asked the youth.

“We have experienced peace in our hearts, and we want to share it with others,” they responded. Their testimony moved Vitali to attend church, and he soon repented of his sins. Later his wife and daughter were also converted. Today Vitali uses every opportunity to speak for Christ.

Vitali’s story is one of many we hear of how Bible story books powerfully impact not only children but also adults. In some countries, evangelists use the simple stories and captivating illustrations to introduce the Gospel to people who have never heard it.

To help provide Bible story books around the world, please click below to give a one-time gift or start a monthly sponsorship.