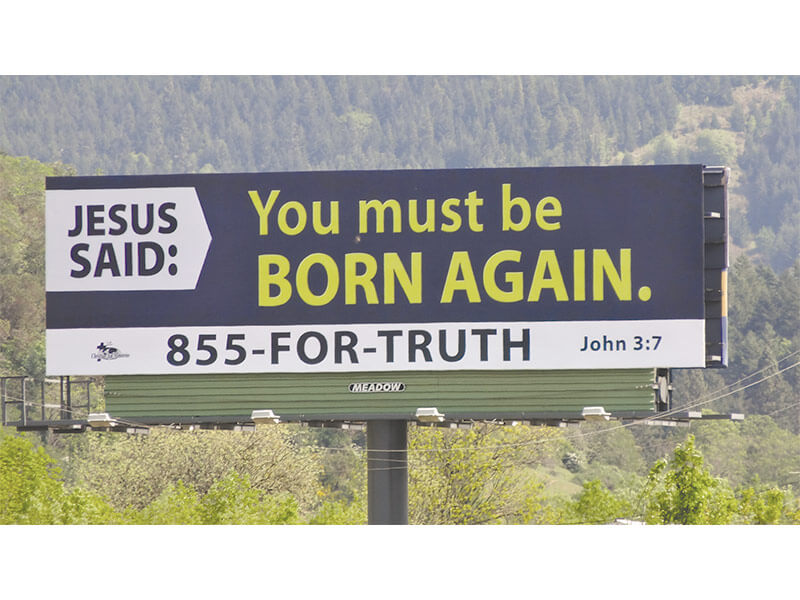 The United States is full of prodigals—people searching for a way back home.

Fred* was one of these prodigals. For 15 years, he had been chronically addicted to gambling. He had gambled away his inheritance and incurred an immense debt. Besides his financial problems, he smoked marijuana, was addicted to cigarettes, and lived an immoral life.

While Fred was wasting his life away, his family was praying for him. God was hearing the prayers of his family and bringing Fred to the end of himself. One day Fred was driving down the road, thinking about the mess he was in. Suddenly a billboard caught his attention. The message on the board was simple—Jesus said: “You must be born again.” He then saw a phone number on the billboard—855-FOR-TRUTH. Truth. Change. That’s just what he needed! Desperately Fred dialed the number.

When a BBE phone team member answered, Fred could hardly compose himself, but soon he poured out his story. “I’ve just messed up so badly; there is no way I can ever get things straightened out,” he said. “There’s no hope for me . . . I’ve had so many chances and I’ve blown them all.”
For over an hour, the team member listened to Fred’s cry for help and explained what it takes to be born again by the Spirit of God. Toward the end of the conversation, Fred began to lighten up. “You have given me hope,” he said.

Fred’s call gives a glimpse into how God is using simple Gospel messages to speak to people throughout the United States. One caller mentioned that he had seen a CAM billboard a year before and had been thinking about the message throughout the year. He was concerned about his lifestyle. The message had read, Where are you going—heaven or hell?

Over 8 million people see a CAM Gospel billboard each day, and tens of thousands call the billboard number every year. Likely millions who see the messages but never call are also impacted by simply being reminded of their spiritual condition. God is working mightily to open their eyes, and to turn them from darkness to light, and from the power of Satan unto God, that they may receive forgiveness of sins (Acts 26:18).