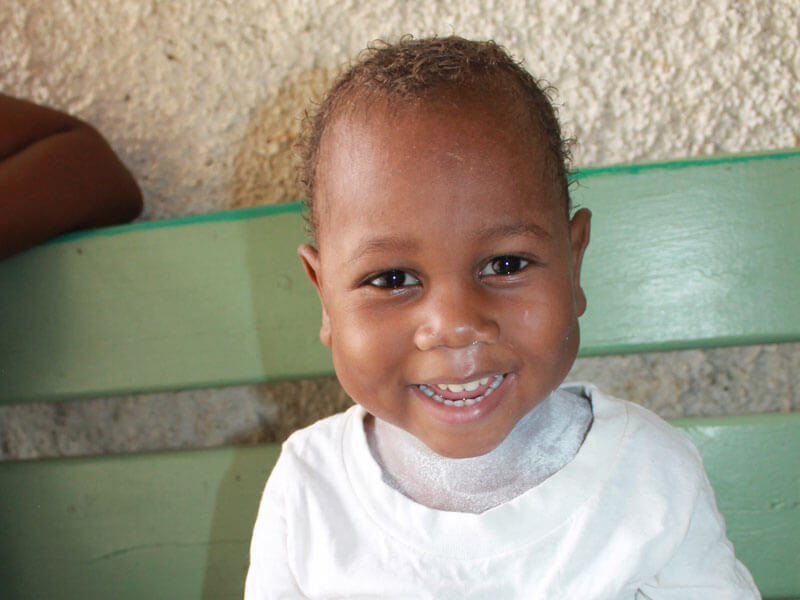 Mayson at the Real Hope for Haiti clinic.

Mayson is a 3-year-old boy who lives in Haiti. Haiti is a place across the sea from America. His family is very poor. They live in a house made of old wood and tin that has only two rooms. It doesn’t have running water, so when Mayson and his family want water, they can’t just turn on a faucet. Instead, they have to walk five minutes to get their water.

Mayson’s dad is a baker, and his mom takes things to the market to sell. Even though his parents work hard, they do not always have enough money to buy food. Sometimes, Mayson would go all day without food. Because of that, he got sick and had to go to a clinic four hours away. When he arrived at the Real Hope for Haiti clinic, his body was swollen.

Sometimes, malnourished children like Mayson don’t get thin. Instead, their body swells up. Even though they look chubby, they will soon die if someone doesn’t help them. This is how Mayson was when he came to the clinic. His feet and legs were swollen. He also had parasites. Parasites are small creatures that live inside a person’s body and eat the person’s food before the person can benefit from it.

Mayson stayed at the clinic for several months where kind people gave him food and medicine each day. Soon the swelling in his legs went down, and he was able to move around much better. He also gained four pounds!

About 30 other malnourished children were staying at the clinic the same time Mayson was. At first when some of them ran and played, Mayson could not run with them because his legs were too swollen. But now he is laughing and running again!

In Haiti where Mayson lives, many children suffer from malnutrition. Sometimes they die if they do not get the food and medicine they need. But because people care enough to share what they have, many children receive help when they come to the clinic in Haiti, and they are soon feeling much better!

The Real Hope for Haiti clinic receives medicine from CAM. If you would like to help provide medicine and nutritional items for malnourished children and adults, please choose from the options below.