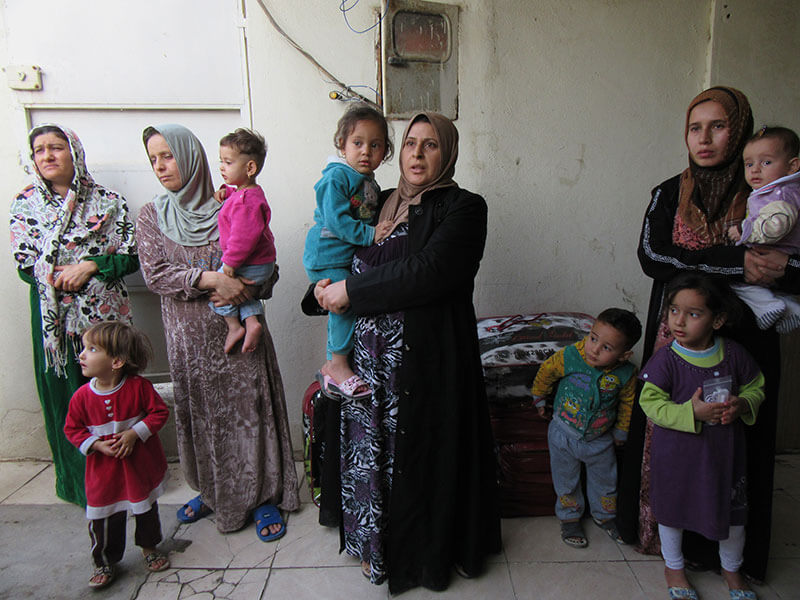 “Our children cried for days at a time.”

Multitudes of people are pouring out of Mosul, Iraq, trying to escape the fierce fighting that has broken out between ISIS and the Iraqi army.

ISIS, a brutal and hardline Islamic group, has been seizing cities and villages in northern Iraq since 2014. Their goal is to set up a region where they can govern by strict adherence to Islamic law. Now the Iraqi government is attempting to take back the territory that ISIS has seized. The heat of the battle is in Mosul, Iraq’s second largest city and the site of the Biblical city of Nineveh.

A CAM team recently visited the city of Qaraqosh near Mosul. This city had been overtaken by ISIS in 2014, but in recent weeks, the Iraqi army had forced ISIS out. Our team found the city, once home to 60,000 people, almost completely deserted. Most of the houses were burned, and the streets were littered with gun shells. A large church was burned out and had been used for target practice.

During the time that ISIS was in control of Mosul and surrounding cities, the group ruled with an iron fist. A fifty-five-year-old woman who recently fled from an ISIS-controlled village was reunited with her husband who had escaped earlier. She hadn’t seen or talked with him in two years. ISIS prohibited communication with the outside world. “They told us, ‘If we find a cell phone on you, we will behead you,’ ” she said.

Throughout the region, stories our staff are hearing from others who managed to escape from ISIS rule are also terrifying:

“We saw many people being killed.”

“ISIS killed my brother-in-law. They exploded our house and took our car. We and our four children escaped in the night and walked two days and three nights in the desert. We had no food or water. Our baby became very sick.”

“Our children could not sleep at night. Sometimes they cried for days at a time.”

Talking with those who managed to escape the wars in the Middle East is heart-breaking and mind-numbing. Trauma is in their eyes. Fear is in their hearts. Almost everyone has lost a loved one, and some have lost their whole family. Others have been separated from family members and have no idea if their loved ones are dead or alive. Young widows struggle alone to provide for large families. Children live in terror, unable to forget the horrific things they have seen.

One source reported, “My wife’s brother . . . was crucified and tortured in front of his wife and children. [ISIS] told him that if he loved Jesus that much, he would die like Jesus.”

How can we help?

CAM staff who are on the ground in northern Iraq have been receiving requests for large quantities of blankets, food, heating fuel, and other aid. With the new surge of displaced people, the need for aid has skyrocketed.

Our goal is to help meet the physical and spiritual needs of as many people as possible, not only in Iraq, but also in Syria, Turkey, Lebanon, and Jordan. Your help in meeting these needs is greatly appreciated. God bless you!