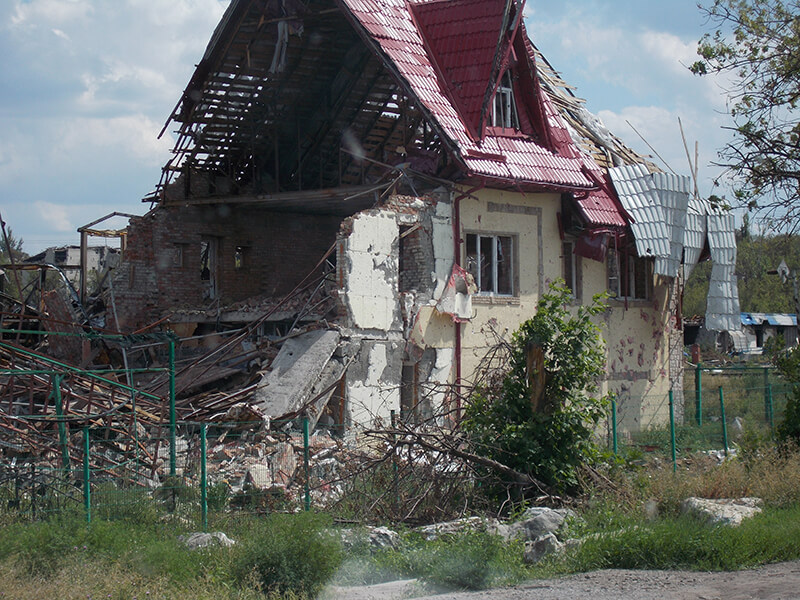 In Donetsk, Ukraine, a man heard a knock during the night. “We know you have a backhoe,” said the armed men outside his door. “Follow us! We need a big hole.”

After digging awhile, the man stopped. But the armed men urged, “No! Bigger!” He dug some more, but they said, “Still too small!” Finally, when they were satisfied with the hole, three military trucks arrived. The trucks were filled with bodies of soldiers and civilians—including children—which were dumped into the pit. “Now cover them!” the men commanded.

Hearing faint moans coming from the pile, the man hesitated, but the armed men ordered him to continue. After returning home, the man immediately gathered up his family and moved out of the area.

Since CAM’s mailing last June about a literature and aid project in Ukraine, hundreds of thousands of New Testaments and Bible story books have been delivered to Ukrainian churches for spiritual outreach. Our staff in Ukraine has been busy distributing food, clothing, and other aid to war victims. Now, the funds designated for humanitarian aid are depleted, while the situation has taken a sharp turn for the worse.

In recent weeks, the fighting in Ukraine has been especially intense and has continued to flare, even though a cease-fire between the Ukrainian military and Russian-backed rebels was declared last September. Hundreds of thousands of people are displaced within Ukraine. Official numbers state that over 5,000 people have been killed and 11,000 wounded since the conflict began last April. But in reality the numbers may be considerably higher. The UN Refugee Agency warns that conditions are ripe for a major humanitarian crisis.

At a church soup kitchen, CAM staff was unloading food when the pastor received a frantic phone call from a church sister who was at a border checkpoint. The pro-Russian guards were angry that she was trying to leave the area and had just shot her young child.

Many younger people have fled the conflict areas, leaving almost no one to bury the dead in some places. One Christian, hearing that his mother had died, traveled a long distance to give her a decent burial. He found the house damaged and his mother’s body dismembered. With no one to help, he loaded her remains on a wheelbarrow and conducted a short graveside service alone.

On the positive side, the deadly conflict has caused people to take their lives more seriously. Many unbelievers have come to God. The sounds of bombs and missiles prompt brethren to make wrong things right. They are acutely aware that life is uncertain.

“In the past we said, ‘Lord willing, we will do this or that,’ ” shared one pastor, “but now this has taken on a completely new meaning!”

CAM’s dedicated drivers face danger on every trip to eastern Ukraine. They brave military checkpoints. They drive over roads cratered from missile strikes. Yet their faces glow as they share about the joy of bringing hope to the needy.

Information for this article was gathered by CAM’s general director David Troyer on a recent visit to Ukraine.