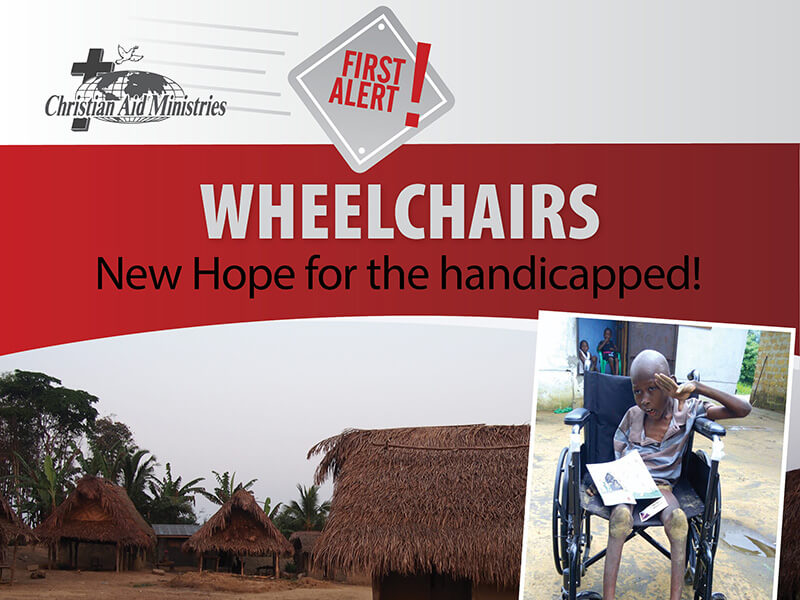 New hope for the handicapped!

Twelve-year-old Momoh’s hands, knees, and feet were calloused and often covered with dirt from crawling on the ground. Momoh was born handicapped and this was the only way he had to get around. Momoh’s father died before he was born. His mother abandoned him at age three. Momoh was at the mercy of others when his aunt took him to help care for him.

As Momoh grew older, he prayed that someone would help meet his needs. When God answered by providing a wheelchair through CAM, Momoh was elated. Though he has severe physical handicaps, Momoh is a bright young man and tries to do as much as possible on his own. The wheelchair enables him to get around more easily. [Note Momoh’s picture on the cover of this mailing.]

Oreta hired a taxi to bring her to the CAM office in Liberia in hopes of receiving a wheelchair. The taxi driver dropped her off at the main road and from there a kind man brought her the rest of the way in his wheelbarrow. She was delighted to return home in a wheelchair.

The handicapped are some of the most vulnerable people that our staff and contacts encounter.

Many of the handicapped have little choice but to crawl on their hands and knees. Some of them wear flip flops or other things on their hands to provide a little protection. In some places, handicapped people are rejected and hidden away because they are considered an embarrassment to their family. They lie in dark rooms or on concrete floors with no way to get around.

While wheelchairs may seem like a small gift to a handicapped child or adult, it is often life changing for them. They now have a way to get out and interact with the people around them.

The demand is so huge they are careful not to spread the news when they have wheelchairs because they know they won’t have enough for everyone.

In the Middle East, the brutal eight-year war has left thousands with injuries and handicaps. Our contacts say they can use as many wheelchairs as we are able to send!

Twenty-four-year-old Ahmad in Syria shed tears of happiness after receiving a wheelchair. This meant he could work again to provide for his mother and siblings since his father was no longer living. Like so many others in the war, Ahmad hadn’t been able to work since he was struck by shrapnel that paralyzed him from the waist down.

The requests for wheelchairs are coming from all directions. As Jesus did during His time here on earth, we want to reach out with love and compassion to the handicapped and disabled. Life is unimaginably difficult for many of them.

In the past we have depended on donated wheelchairs. But now we have so many requests that we would like to purchase wheelchairs by the truckload and ship them to Syria, Yemen, Liberia, Romania, Israel, Haiti, and other countries. Each wheelchair costs us approximately $100. If you would like to contribute to this great need, your help will be a wonderful blessing to the handicapped and wounded.

To help support the WHEELCHAIRS program, please click below to give a one-time gift.