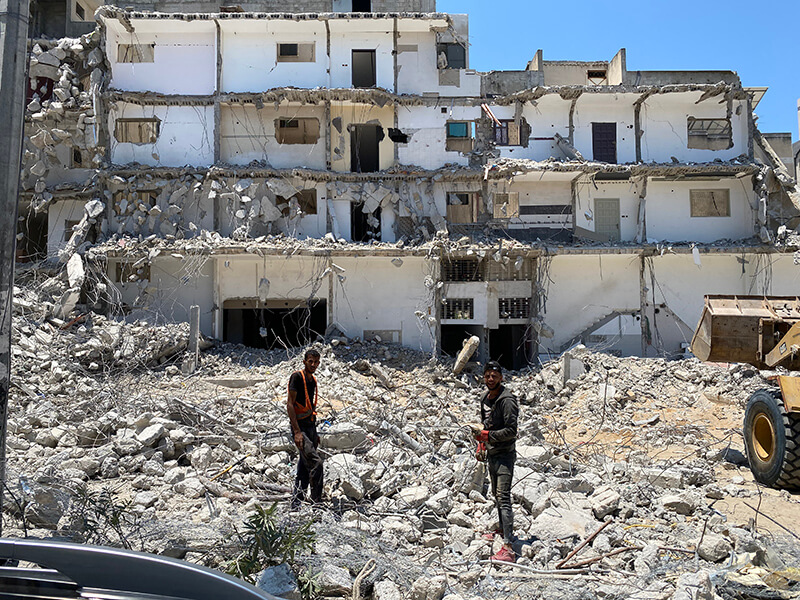 Voices from Israel and Gaza conflict

The ceasefire that officially ended the burst of fighting between Israel and Gaza earlier this year seems to be holding. But people on both sides of the conflict continue to live with aftereffects of the conflict. Sorrow, loss, and need are the realities of this region.

CAM staff recently visited an Israeli community near the Gazan border. This community experienced a constant rocket barrage during Israel and Gaza’s fighting. The population learned to live with an ear tuned for the words, “Red alert!” sounding from loudspeakers. This alert gave people ten seconds to take cover in the nearest bomb shelter.

CAM staff toured several houses that were struck by rockets. A gaping hole stood next to the front door of one house. Shrapnel had shattered nearby concrete and bricks. Two hundred feet from the hit, shrapnel had also punched a hole through a neighbor’s steel door. “We fear the shrapnel much more than the actual rockets,” said one Israeli citizen. 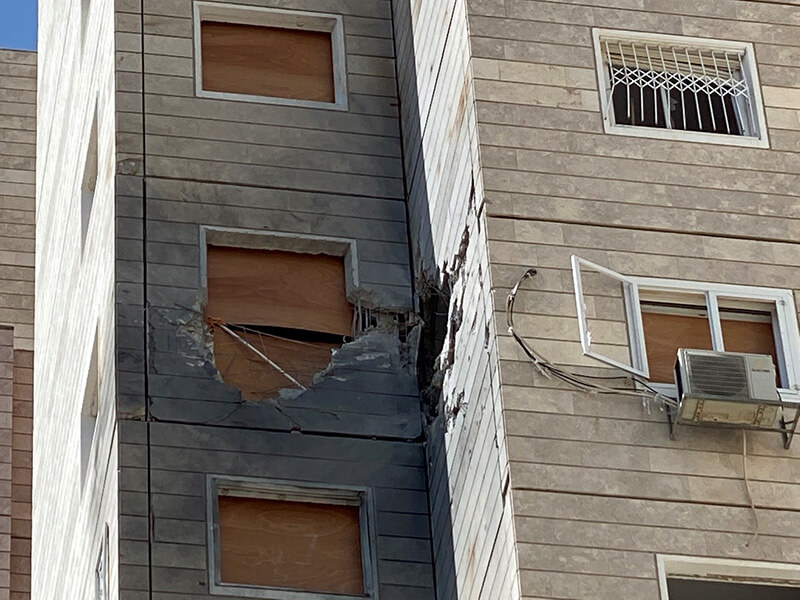 Across town, a tall apartment building took a hit by a rocket. The boarded-up windows and smoke-blackened concrete told the story.

But it was the adjacent apartment building where a tragedy occurred. When the red alert sounded, a mom and her five-year-old son took refuge in their safe room. The incoming rocket slammed into the building beside theirs. But a long piece of shrapnel pierced through the metal window-covering of their safe room and killed the little boy lying in his bed.

A resident of the town explained, “A month after the ceasefire, children still run for shelter whenever they hear a loud bang, a jet, or a whoosh.”

CAM staff also visited homes in Gaza after the war. Destruction is visible everywhere in Gaza. Crews are at work cleaning up rubble and rescuing rebar.

A Christian family in Gaza related their experiences during the Israel/Gaza war. More than twenty bombs killed five of their neighbors and completely destroyed a building across the street.

“None of us could sleep at night during the war,” the oldest son explained. “At best, we slept three hours during the day.

“After one long night, the children were finally getting some fitful sleep. Ten-year-old Basima,* who suffers from asthma, had fallen asleep on the couch. Suddenly at 6:00 a.m., a bomb struck the road just below the house. The building rocked like an earthquake, and the blast shattered all the windows. Glass shards exploded into every room with a window.

“Basima woke up covered in shards of glass. She screamed in pain when she saw blood dripping where a shard had pierced her arm. Then she started wheezing and crying and gasping for breath. Then there were more explosions. We cried, we shook in terror. Destruction was all around us.”

“But thank God. He kept us safe. God is good. The war is over, but the emotional trauma remains. The children still live in fear. Any noise like a dish clinking on the table makes [them] jump.”

This conflict between Israel and Gaza caught thousands in the crossfire. CAM is providing food and other aid to needy families in this fragile region. Thank you, supporters, for extending help to those who are suffering.

To help with needs in this region, please note click below or give a one-time gift. 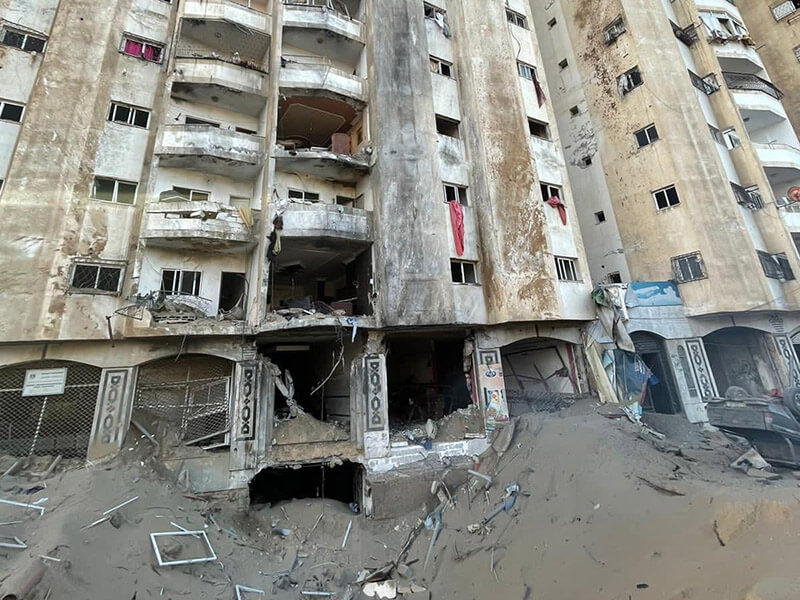 Eleven days of fighting left a path of destruction in both Israel and Gaza.

After eleven days of deadly fighting, an Egyptian-brokered ceasefire took effect between Israel and the Hamas regime in the Gaza Strip. During the conflict, Palestinians fired thousands of rockets into Israel, and the Israeli military carried out hundreds of airstrikes in Gaza. Twelve people were killed in Israel and at least 232 people in Gaza. 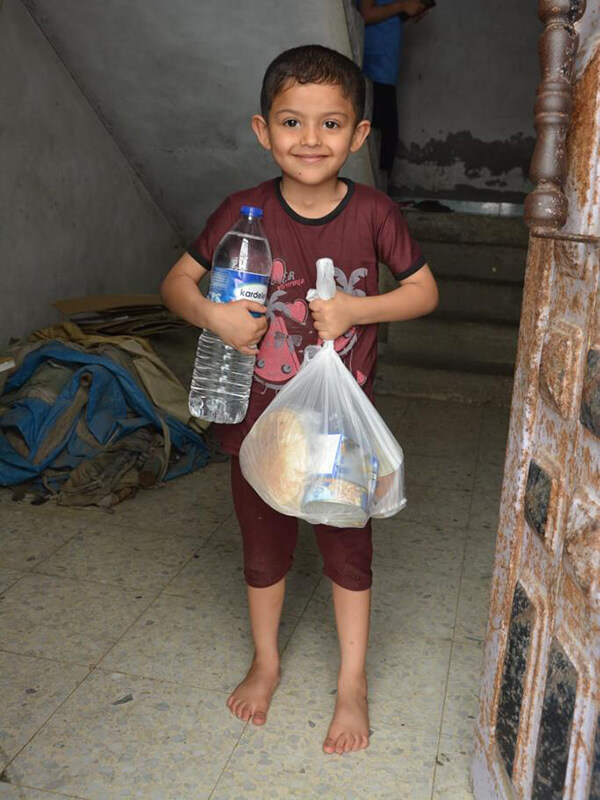 CAM has begun to provide food and water for displaced families who are not able to return to their homes.

While active fighting has ceased, the ongoing devastation is far from over. CAM has begun to provide food and water for displaced families who are not able to return to their homes.

People on both sides of the conflict suffered intense fear as the fighting raged. One man living inside Gaza shared his perspective with CAM staff. He said that the destruction of buildings and infrastructure and the loss of electricity and water were bad. But the ongoing horror was the noise. There was the irritating buzz of camera drones. Then there was the noise of helicopters chopping through the sky and fighter jets roaring overhead. And of course, there was the devastating noise of falling bombs. These sounds echoed off the Mediterranean, so every noise was magnified.

For eleven days children lived in fear as houses around them shook and windows were blown out.

On the other side of the conflict, Israelis in communities near the Gazan border also lived in terror. Normal life was completely disrupted, roads and schools were closed, and air-raid sirens blared. Some people did not leave their house for a week and a half, too afraid to even take out the trash. A CAM contact’s friend living in Ashkelon, about twenty miles from the Gaza Strip, told his story. He said that during the night they ran for the stairwell several times every hour when rocket sirens sounded. They waited in the stairwell as rockets and bombs exploded nearby and other bombs were intercepted above them. Another Israeli family near the Gazan border shared how they slept and ate in their safe room during the conflict, leaving it only to use the bathroom or bring in food.

Continue to pray for the many people affected by this conflict. Many people in this region face a long road to recovery.

If you wish to help provide food, water, and other aid for displaced families in this region, use the donate option below. 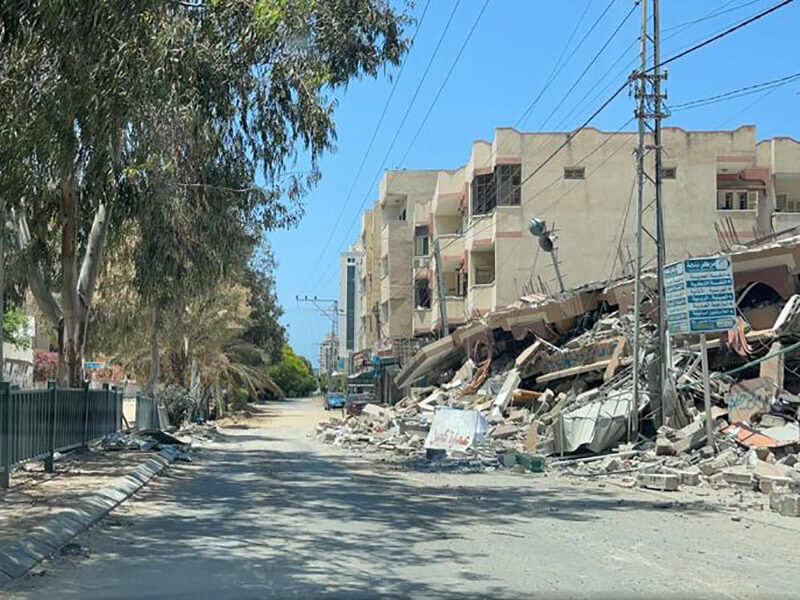 Within the past week, Palestinian militants launched almost 2,000 rockets into central and southern Israel. In retaliation, Israel carried out hundreds of air and ground strikes in Gaza.

It seemed like life in the area was slowly returning to normal after more than a year of sickness, economic distress, and government-enforced restrictions and lockdowns related to COVID-19. Then this new problem emerged. Many voices are calling out hate on both sides.

An escalation of violence

Several factors contributed to the escalation of violence. A Palestinian election was canceled. Housing disputes in Jerusalem led to violent clashes between Israeli forces and Arab protesters. During the Muslim holy month of Ramadan, clashes broke out between Muslim worshippers and Israeli police on the Temple Mount in Jerusalem. The aggression of right-wing activists and rioting among the various people groups also added to the conflict.

The heightened tensions spilled over into violent attacks by civilians across Israel, targeting both Jews and Arabs. Casualties have taken place on both sides.

This conflict escalated to a climax on Monday, May 10. The Hamas regime in the Gaza Strip issued an ultimatum to Israel. They warned of retaliation if Israel did not evacuate the Temple Mount by 6:00 p.m. At 6:10 p.m. Gaza fired rockets that reached Jerusalem, although most of them were intercepted by the Israeli military. The fighting has continued since then.

Most intense conflict between Israel and Hamas since 2014

This conflict is the most intense aerial exchange between Israel and Hamas since 2014. More than 100 people have been killed in Gaza, many of whom were children and women, and eight Israelis have lost their lives.

We are researching the best ways to help those affected by this conflict. Many suffering people are caught in the crossfire. An abundance of physical needs will undoubtedly result from this new conflict, and we are preparing to help meet those needs. A CAM contact from Jerusalem sums the situation up by saying, “Our greatest need right now is prayer.”

If you wish to help those affected by the conflict between Israel and the Palestinian territories, use the donate option below. 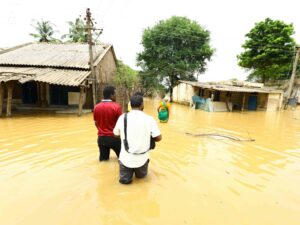 Flooding in Asia devastates many villages

Months of heavy rain caused flooding in Asia that overwhelmed streets and houses. The seasonal monsoon rains left many villages and houses under water. CAM provided support to contacts who have been delivering aid in Pakistan and Afghanistan, and most recently, helped...
Read more.. 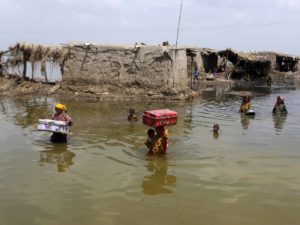 Flooding in Pakistan and Afghanistan

People in Pakistan and Afghanistan are desperate as they endure severe flooding after weeks of heavy rains. Millions have fled their homes for higher ground, wading through feet of water while carrying children and a few possessions. Walls and roofs have collapsed in...
Read more.. 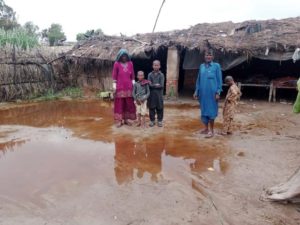 Flooding in Pakistan and Afghanistan Update

Pakistan, Afghanistan, and other parts of Asia are enduring the worst flooding they have experienced in decades. Millions have fled their homes for higher ground, wading through feet of water while carrying children and a few possessions. Walls and roofs have...
Read more..