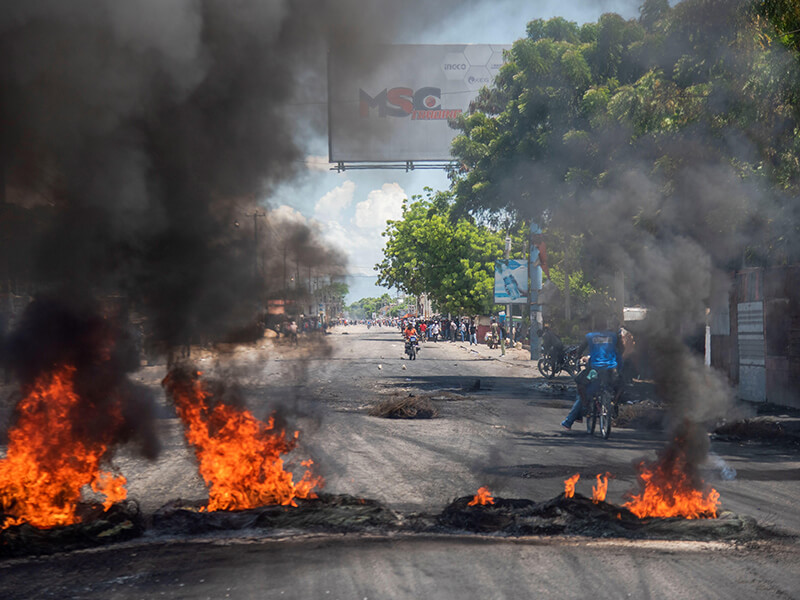 “There is no hope in this country,” says Stamene Moliere, a twenty-seven-year-old unemployed secretary in Les Cayes, Haiti.

Millions of Haitians are in distress. For years the country has been trapped in cycles of political and economic dysfunction. But many Haitians say the current political crisis is worse than anything they have ever experienced. Those already familiar with hardship now face even more difficulty.

Rampant corruption, economic decline, fuel shortage, and other troubles have led to months of unrest in Haiti. Tens of thousands of people have taken part in marches and protests. Widespread roadblocks, some patrolled by armed men, have brought public transportation to a halt. In the cities, travel is often dangerous or impossible.

The crisis in Haiti is getting more complicated every day. Food and fuel prices have more than doubled. Businesses are closing, causing unemployment to rise. All this compounds Haiti’s chronic poverty and hunger problem. In addition to the political upheaval, some Haitians are facing serious hunger following last season’s long drought.

Lack of nutrition is causing people to get sick. But clinics have little or no medicine to help the sick, and hospitals are being forced to cut services or close entirely.

Schools are also affected by this crisis. Most schools in the major cities are closed, but those located in the countryside are attempting to operate the best they can.

Angry Haitians are frustrated at their conditions and are demanding that President Moise resign, which he refuses to do. The upheaval and increasing lawlessness has killed numerous people and injured many more.

Among those who died was fifteen-year-old Jasmine Pierre. Her father said she was inside their home when a stray bullet fired by police at protesters struck her.

What can be done to help?

Together with our national staff and other contacts in Haiti, CAM has been researching the best ways to help in this critical time of need.

To avoid creating dependency or negatively impacting recipients’ dignity, we plan to organize Work-for-Wages projects in various parts of Haiti. This will help some of the most vulnerable Haitians who are unable to find jobs or buy sufficient food for their families during this hard time. These projects will enable them to earn money while doing something that benefits others.

Rebuilding roads: We plan to organize Haitian work teams to rebuild roads. The majority of roads in Haiti are in desperate need of repair. The laborers will be given cash, which will help them buy food for their families.

There are opportunities in some areas of Haiti to dig trenches and pipe water from existing wells to places that don’t have water. With proper piping, the water in some areas can be pumped approximately four miles away. We plan to hire Haitian laborers to dig the trenches for these pipes by hand. In some areas, we may first need to drill new wells.

In addition to providing work projects, we are exploring ways to help the elderly, handicapped, and others in Haiti who are unable to work. Haiti has had many needs over the years and this serious political upheaval has magnified those needs.

If you wish to help with funds to establish Work-for-Wages projects, your contribution will bring hope to many. If more funds are received than needed, they will be used for other physical and spiritual needs in Haiti.

Thank you and God bless you!

To help support the Haiti Political Crisis program, please click below to give a one-time gift or start a monthly sponsorship.