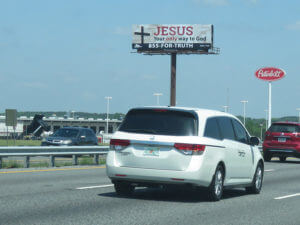 The 855-FOR-TRUTH phone number has been scattered all over this nation on thousands of billboards for more than 10 years. 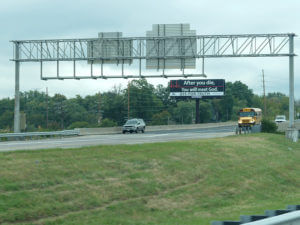 “I want to meet God in peace.”

Courtney admitted she was not a Christian, but told our phone team member, “I want to meet God in peace.” She was grateful for the truth our member shared. 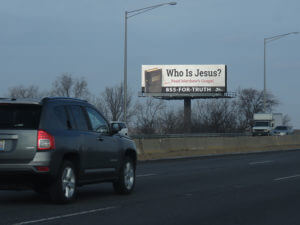 God Uses Phone Calls to Give Knowledge of Truth

Scott noticed our Gospel billboards and called to hear more about truth. He studied the Bible,but he never believed it was the truth and the Word of God 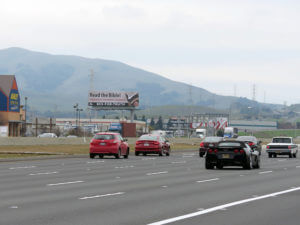 The Power of Literature

Landon had no Bible, so we sent a Bible, with other literature including the tract, Born Again—What Does It Mean? and the audiobook, Greasy the Robber. 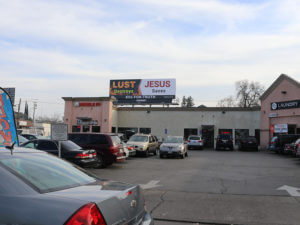 “I never forgot them”

Lindsay’s father was very abusive and a hardened atheist. Recently, Lindsay tried to share her Christian faith with her father who is now on his deathbed. 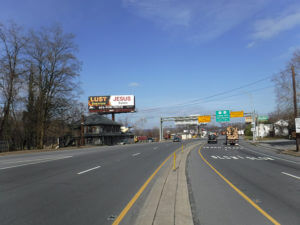 This strategically placed billboard stands at the onset of a row of immoral and evil businesses, on Route 322 from Harrisburg, Pennsylvania. 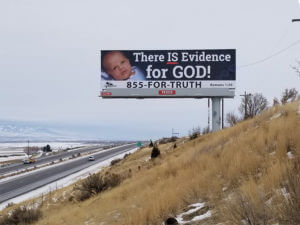 “Is marriage for life?”

“Is marriage for life?” Asked Matt*. Our phone team member replied, “It certainly is.”

For many Americans, discouragement means hopelessness. And hopelessness means there is no one to turn to. So where do they go?

Many turn to drugs and alcohol or to temporary fixes that only take the edge off their pain and discouragement. But some turn to something they believe will be a permanent fix—suicide. 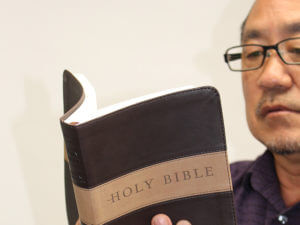 “Please prove to me that there is a God”

I’m an atheist,” Brett said. “Can you please prove to me that there is a God?” 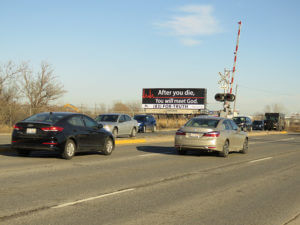 The impact of a sermonette

Over the last several years, Marisa has seen CAM billboards along highways. About a year ago she called our toll-free number and listened to nearly all of the short sermons listed on our phone menu. At that time she wasn’t sure if she was a Christian. 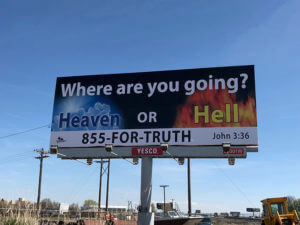 Thinking about it non-stop

Ariel saw one of CAM’s Gospel billboards three days ago. She said, “I’ve been thinking about it non-stop—‘Where are you going, heaven or hell.’ 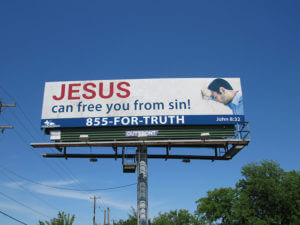 Surrender on the side of the highway

While driving down the highway, Keith called our toll-free number. He was sick of his life. His mind was in turmoil. Tired of trying to come back to the Lord on his own strength, Keith was ready to turn it all over to Jesus Christ. 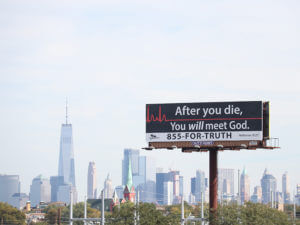 “How do I get Jesus inside of me?”

Discouraged and struggling, Justin* longs for a different life. When he called our billboard number, our team member explained the Gospel to Justin and described how he could experience a new life in Christ. 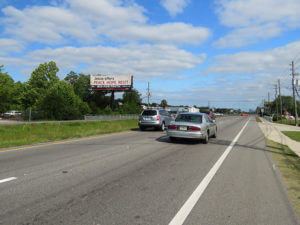 “I am still alive”

Two years ago I called in total despair and ready to take my life. Your team member so kindly talked to me of God’s love and tenderness and prayed with me. 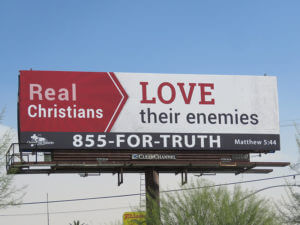 James* saw a CAM billboard that read, Real Christians love their enemies. He said this Gospel billboard had a thought-provoking statement and the message caught his eye.